MPK has warned it will take action against baseless accusations of corruption. 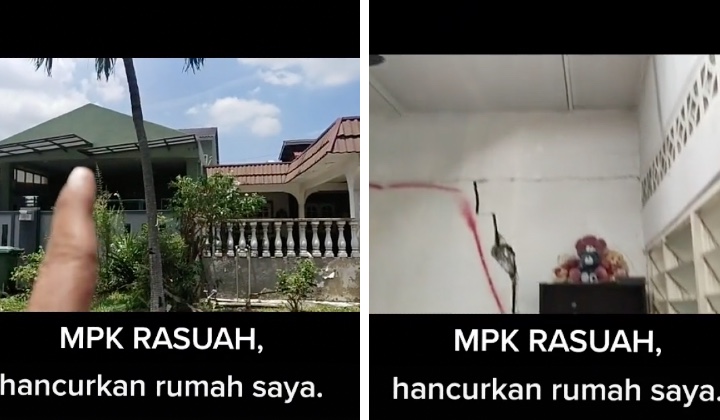 The Klang Municipal Council (MPK) has welcomed a homeowner to complain if he suspects there is any corruption or misdeeds.

The homeowner has complained that his house cracked due to renovation work by his neighbours.

He posted a video on TikTok accusing MPK officials of being corrupted in allowing the renovation.

The video, posted by a user by the name of @Rakeshbathumalai, has since gone viral with more than 1.3 million views.

The complainant was adamant that MPK officials had taken bribes and expressed his anger at being victimised.

In the video, he sounded indignant and frustrated as his house had become a shamble, with cracks all over the house and the backdoor couldn’t even be opened.

He also pointed out that he had to move to another place because his house was not safe to occupy.

The renovation work on the house also has the consent of the neighbours involved.

Complaints submitted by complainants after approval are also taken action by the MPK, she said in a statement.

Previously, a consultant was also appointed to identify the cause of the cracks and certify the strength of the additional structure of the house.

Commenting further, Norafiza said the MPK upholds the principles of transparency and integrity and will not compromise on issues involving corruption and abuse of power.

She said MPK would not hesitate to make a report against individuals who issued defamatory statements against its staff, especially involving these issues.

The council did not hesitate to file legal action against individuals who issued defamatory statements against top management and MPK officers and staff.

MPK’s Director of Corporate Communications Norfiza Mahfiz on allegations linked to corruption or other moral misconduct.

Some claimed that such a problem is all too common in Klang.

I nvr exclude jjran x pile when construct as main factor. Just tht the crack pattern and he stated other house facing same issues makes it looks other factors may play some role. Klang is marine clay area, settlement shd be expected but designed to be even.

However, he said it was clear that the house’s renovation was not following the set conditions.

This issue is understood to have dragged on for more than 10 years and several actions have been taken by MPK officers to resolve it.

However, we understand that there is no response or statement from the MPK on this issue.

In the meantime, Charles requested that Noraini and MPK explain the allegations made in the viral video.

He also urged MPK to show all the documents on this issue in a press conference.

The DAP lawmaker said the action must be taken to ensure that the good name of MPK and the Selangor government is not tainted.

An explanation from the Malaysian Anti-Corruption Commission (MACC) is also needed as there are allegations of corruption in this matter.

Klang MP Charles Santiago on the seriousness of the matter.

MACC’s Probe On Individuals Linked To The LCS Scandal Completed, Waiting For AGC For Further Action