The pile-up started after a BMW was hit from behind. 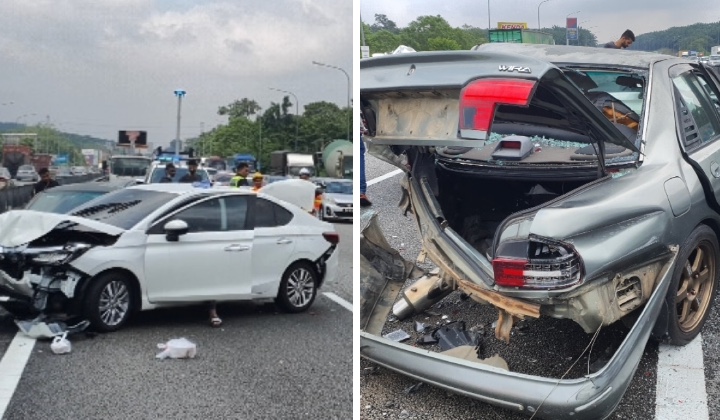 An accident involving seven vehicles at Kilometer 271.1 of the North-South Highway in Negeri Sembilan has resulted in congestion for about seven kilometres.

Nilai District Police Chief, Superintendent Mohd. Fazley Ab Rahman said the accident at 1.40 pm yesterday happened when a BMW that stopped due to traffic congestion was hit from behind by a Toyota Vios.

The Toyota Vios was then hit by a Mercedes before four other vehicles came and collided in a ‘bumper to bumper’ manner.

However, no one was injured and only the vehicles were damaged after the accident.

Mohd. Fazley said that there was congestion for about seven kilometres as a result of the accident.

Traffic was controlled by members of the Highway Patrol, the Royal Malaysian Police (PDRM) and the highway concessionaires, and traffic returned to normal at 4.30 pm.

The case is being investigated under Rule 10 LN 166/59 of the Traffic Rules 1959, and further investigations are still ongoing.

What Are The Common Causes Of Road Accidents?

Lack of attention, reckless driving, lack of proper protection, speeding, bad personal habits, social and behavioural misconduct and inconsiderate drivers of larger vehicles are some of the problems that cause accidents.

How can accidents be prevented?

Accident prevention is important as it will reduce injury, illness and death rates.

Netizens are playing their part by spreading awareness about road safety on social media.

They are concerned about the increasing trend of unsafe driving that leads to vehicle accidents in which many people die.

Victims could also experience the feeling of fear or sadness that remains with them for a long time after an accident.

The authorities are also stepping up efforts to make people become aware of road safety and traffic rules.