The woman is said to have succumbed to complications of high blood pressure. 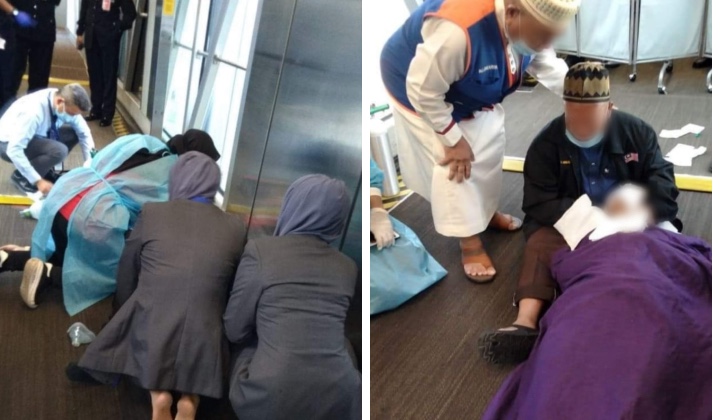 A woman’s umrah journey ended in heartbreak for her loved ones when she died on arrival at the Kuala Lumpur International Airport (KLIA).

KLIA District Police Chief, Assistant Commissioner Imran Abdul Rahman said the death of the umrah pilgrim, who had just returned from the Holy Land, was due to complications of high blood pressure.

According to Imran, the police was alerted about the incident at 1.10 pm, involving a 53 -year-old local woman.

The police received a call informing of a death at aerobridge Gate C12 for flight MH8021 and the physical examination on the deceased did not find any suspicious effects.

Based on the results of the investigation, the victim was found to have high blood pressure.

According to a report from a mutawif (guides of the Hajj and Umrah pilgrimage), the woman is understood to have collapsed and fainted as soon as she came out of the plane door.

The victim was also assisted by the plane’s crew and medical team but she was pronounced dead at the scene.

In the meantime, police said the remains were managed according to Covid-19 standard operating procedures (SOPs).

The remains were sent to Serdang Hospital for further action.

After two years of delayed Hajj due to the Covid-19 pandemic, a total of 298 pilgrims became Malaysia’s first Hajj group for the 1443H/2022 season to leave for the Holy Land recently.

Saudi Arabia has set a pilgrimage quota of one million pilgrims for the 2022 season of which 85 percent is allocated to foreign pilgrims.

Malaysia’s quota decreased to 14,306 pilgrims from the 31,600 pilgrims allowed in previous years.

The allowed pilgrims must be 65 years old and below, have no chronic disease, with Covid-19 vaccination certificate and must submit a negative smear test (PCR) result within 72 hours from the time of departure.

Prospective Malaysian pilgrims have been advised to abide by certain health conditions set by the Saudi Arabian government.

Those who failed to pass the health screening, and rejected from going, have been told to be open-minded.

More than 1,000 prospective Malaysian pilgrims who accepted the offer to perform the ritual for the 2022 season, had to reject the call due to various factors, including health problems.