Malaysians who do not think highly of the movie have been accused as unpatriotic. 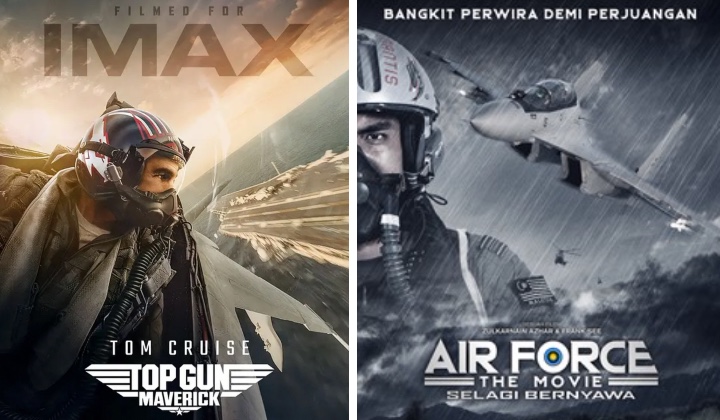 A locally made movie has been compared to Top Gun: Maverick by Hollywood superstar Tom Cruise.

Air Force The Movie: Selagi Bernyawa is touted as an epic and action-packed film with a military concept.

The movie has yet to be aired, but it already started a debate on social media.

Some netizens said they are eager to watch the movie as a show of support.

They said the film is a break from the typical genre of ghost movies and love dramas produced by the local film industry.

They argue that those who looked down on the film are unpatriotic.

Those who supported the movie said it should not be compared to Hollywood movies as the standard is different.

At the same time, some netizens said the title of the movie could have been better and fully use the national language instead.

Air Force The Movie: Selagi Bernyawa is an epic and action-packed film with a military concept that will rock cinemas nationwide starting 25 August.

The launching ceremony of the film Air Force The Movie: Selagi Bernyawa was recently officiated by the Commander of the Armed Forces, General Tan Sri Affendi Buang, at a ceremony in Subang Air Base.

Affendi praised the movie as on par with international films.

What is more interesting is when it focuses on the services of the Royal Malaysian Air Force to be shown to the general public.

General Tan Sri Affendi Buang on the movie being a recognition and appreciation of all RMAF personnels.

He added that every military scene has been discussed together to show as close as possible the real situation to the audience.

As such, he is confident that the film will be named one of the best local action films for 2022.

The film is directed by Zulkarnain Azhar and Frank See and stars Datuk Adi Putra.

No One Left Behind

The movie follows the story of a PASKAU (Air Special Forces) team led by Captain Adib and his mentor, Major Adnan, tasked with protecting humanitarians serving in a war-torn country, Namburi.

Upon returning home, their plane got unexpectedly shot down by local militants.

Nine of the passengers managed to make their jump before the plane crashed.

Back in Malaysia, upon discovering the news, the air force prepares for rescue.

Adib’s brother-in-law, Zafran, a grounded Sukhoi pilot, fights for the opportunity to save them.

The air force deploys help, and the survivors make their final run to salvation.

PASKAU is the special operations force of the Royal Malaysian Air Force (RMAF).

It is not easy to become an elite commando member of the PASKAU as they have to undergo ‘punishment’ training day and night for three months.

They need to be tested mentally and physically before qualifying as PASKAU members and being awarded the blue beret.

Selected RMAF members will have to go through training modules set by the RMAF Combat Training School (SLTT) in Bukit Ibam, Pahang.

The training includes 160 kilometres of long-distance traversing on-road and tactically rowing a combat boat for 120 km, among others.

A positive attitude is also very important, especially in giving full commitment to defend the sovereignty of the country.