The mother thought her kids were just sleeping and tired. 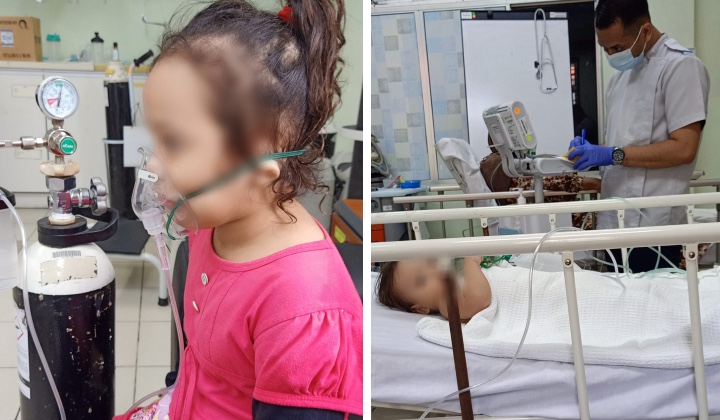 A woman almost lost her three children to carbon monoxide poisoning while they were in a car.

Nur Jalilah Leyla recounted the ordeal which happened while the family were on the way from Kuantan, Pahang to Tanjung Karang in Selangor.

She was also with her in-laws in the car during the road trip.

In a lengthy post in Facebook, she recounted how everything seemed fine even as they stopped in Temerloh for lunch.

Things started to went awry when they continued the journey.

Her husband noticed something wrong when she sent a picture to him of the kids.

He said the kids look fatigued, but Nur Jalilah didn’t think much as she thought it’s due the hot weather.

As they reached Bentong area around 1pm, she felt something was not right.

One of her kids, named Deeja, suddenly woke up but the eyes remained closed.

Nur Jalilah became alarmed as the kid’s body was weak. She tried waking her child but to no avail.

Her two other kids, Eijaz and Zara, cried as they saw their sibling being lifeless.

She immediately stopped the car and tried to get help from passersby.

Shortly after, a Chinese man stopped and tried to help. The man, named Richard, suspected that it was gas poisoning and asked the family to wind down their car windows.

Richard then guided them to the nearest hospital, during which Nur Jalilah was drowned in fear and anxiety.

While on the way to the hospital, Eijaz and Zara, also fell unconscious.

Nur Jalilah herself started to feel like vomiting and feeling dizzy, as if about to faint.

When they reached an Orang Asli hospital in Gombak, her mother in-law also fainted.

Thankfully, the kids and the in-law were resuscitated using oxygen.

An ambulance took them to Selayang for further treatment, while the car was left behind to avoid further gas poisoning.

READ MORE: We Were Not Sleeping In The Car: Girl Recalls Chronology Of Carbon Monoxide Poisoning Which Killed Her Friends

The doctor confirmed that the family had indeed suffered from carbon monoxide poisoning.

Nur Jalilah said the kids could have died if she were to realised the situation a bit later.

She concluded by thanking Richard for calming her down during the stressful moments.

READ MORE: How To Know If Your Car Has A Carbon Monoxide Leakage