Authorities are stepping up the manhunt across the nation. 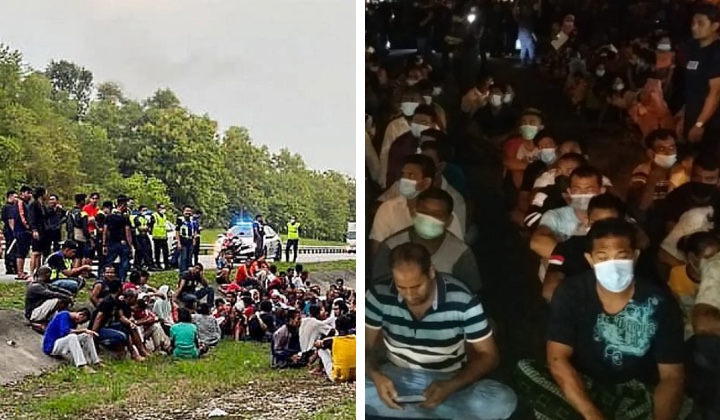 Its Minister, Datuk Seri Hamzah Zainuddin said his party, especially the Immigration Department, continued to carry out operations and raids.

I would like to emphasize that the operation to hunt down the 60 foreigners who escaped will continue. We will make a large-scale raid until all of them are caught.

Datuk Seri Hamzah Zainuddin on the ongoing effort to track down the remaining Rohingyas on the run.

The minister made the statement after participating in a special enforcement operation at the Meru Central Market recently.

The incident at 4.30pm resulted in six of them dying in an accident while trying to cross Kilometer 168 of the North-South Expressway (PLUS) near Jawi, Penang.

READ MORE: Sungai Bakap Depot Rohingyas Break Out Due To Fear Over Deaths

These include proper meals, clean water and facilities for prayer and education for the children.

He said the government must also spell out a clear time frame on how long the Rohingyas will be detained.

Mohd Azmi, who had been assisting the Rohingyas here and abroad in Bangladesh, also called on those on the run to turn themselves in peacefully.

He also calls on the Malaysian public to have empathy for the Rohingyas.

There are many reasons why people seek to rebuild their lives in a different country. The Rohingyas have a well-founded fear of persecution for reasons of race and religion.

Nearly 180,000 refugees and asylum seekers are registered with the UN's refugee agency, UNHCR, in Malaysia, more than 101,000 Rohingya and 52,000 others also from Myanmar. Refugee community groups estimate tens of thousands more are undocumented, awaiting UNHCR appointments.

In a related development, the Malaysian Anti-Corruption Commission (MACC) will investigate a case involving four local men of whom two are civil servants.

They are suspected of being involved in smuggling 119 Rohingyas into the waters of Sungai Kedah, Kedah recently.

Kedah MACC director Datuk Shaharom Nizam Abd Manap said the MACC’s initial action was to identify the offence if it detected any evidence of corruption.

The MACC will take action if there is evidence of corruption. We take the incident very seriously and any party should be warned because human trafficking can threaten national security.

The public is also advised to channel any information related to the case to the MACC.

Sinar Harian reported that an attempt by four local men to smuggle in 119 Rohingya ethnic groups in the waters of Sungai Kedah failed.

Why Does The Refugees’ Children’s Education Matter To Us? [Opinion]