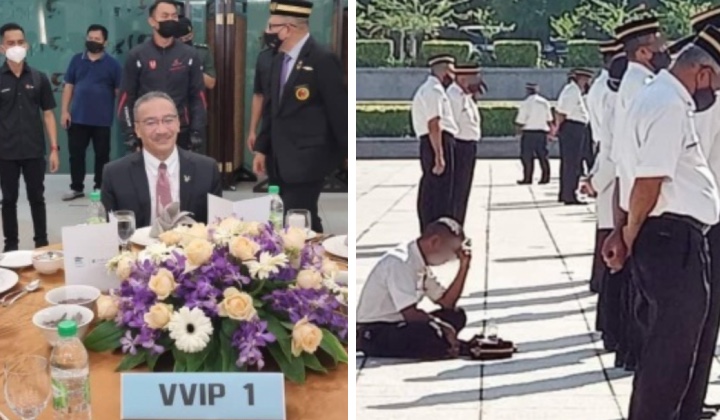 Netizens are seeing red over a video which showed a group of Malaysian Armed Forces (ATM) veterans standing under the hot sun.

The incident happened during the 100th anniversary parade of veterans at Dataran Pahlawan Negara in Putrajaya recently.

The veterans were forced to ‘sunbathe’ while listening to a speech by an officer under a tent.

Netizens expressed regret that the military retirees are treated in such an inconsiderate manner.

They pointed out that the nation owes the veterans a debt of gratitude and a duty of care, particularly when they develop health problems as a result of their military service.

Netizens also drew comparison to a recent incident in which students were made to eat while sitting on canteen floor.

Veterans Are Entitled To Care

He puts the blame on the event organiser, which should have been much more considerate.

First of all, the march parade is perhaps unnecessary. Camaraderie is well-established among the army veterans. I’m confident the mutual respect is there. A symbolic parade would have suffice.

Camaraderie is the essence of what binds military units together, providing a cohesiveness among the individual members, which allows the unit to function effectively as a collective entity.

Raja Affandi added that everyone should have dined together in the hall.

He said Senior Defence Minister Datuk Seri Hishammuddin Hussein is a caring leader who would have very much preferred to mingle with the rank and file.

I know the defence minister very well. He is very approachable and always look forward to interact with the veterans.

Meanwhile, Hishammuddin said the government will announce good news for veterans of the ATM soon.

The defence minister said he had not been able to reveal details on the matter yet.

We in the ministry have been working hard for nine months, and we are just waiting for the time to announce the matter.

The Sembrong MP said it cannot be announced now because there are matters involving other ministries other than those related to other departments in the Ministry of Defense as well as matters that depend on allocations.

Hishammuddin, who is also Umno vice-president, made the comment in a press conference after the veterans’ parade.

He assured that any matters, including the claims and wishes of the ATM veterans, that could be resolved, would be announced immediately.

I myself have always put the welfare of ATM veterans as a priority from the beginning and as long as I am the Minister of Defense, believe me, my stance will never change.

Harith Iskander Apologizes For His Remarks On Armed Forces’ Roles