The incident happened in the wee hours of the morning and the victim is yet to be found. 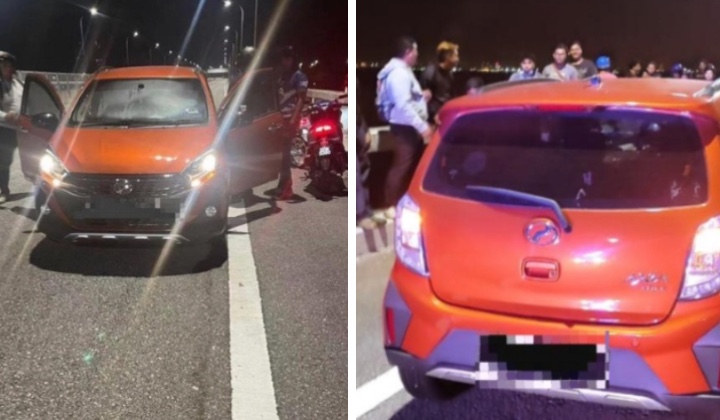 A woman was feared to have drowned after jumping from the Penang Bridge, which has been a hotspot for suicide attempts.

The incident happened early this morning at Kilometre 8.0 heading towards Perai.

The 22-year-old victim is said to have left her car, an orange Perodua Axia, with personal belongings by the bridge wall before diving into the sea.

According to the spokesperson of the Fire and Rescue Department of Malaysia (JBPM) Jalan Perak, they received a call regarding the incident at 3.39 this morning.

Firefighters tried to locate the victim but it is feared that she has been washed away by the current.

The search and rescue operation was temporarily suspended and resumed this morning.

The incident was the second incident in 12 hours.

Prior to that, a 27-year-old woman also jumped from the Penang Bridge at Kilometre 7.4 from the island towards Perai at about 2.40 pm yesterday.

However, the woman was rescued by fishermen who were nearby.

Last week, the body of a 28-year-old man who jumped into the sea from the Penang Bridge was found after three days of search and rescue operations.

What Are The Signs Of Suicidal?

Suicide is death caused by injuring oneself with the intent to die.

A suicide attempt is when someone harms themselves with any intent to end their life, but they do not die as a result of their actions.

Many factors can increase the risk for suicide or protect against it.

Any of these could be potential warning signs for suicide:

"Malaysia has seen a 61.7 per cent jump in suicide attempts over the course of six years from 2016…"https://t.co/kuTY9h76rH#mentalhealth #health #SuicidePrevention

The nation’s rising suicide rate has raised concern that there are not enough resources for those seeking help for mental health issues.

The demand for mental health services has increased in recent years.

Many people had no choice but to seek public services due to the high cost of consultation in private clinics.

Last year, the government announced its intention to amend the Penal Code to decriminalise suicide.

The move is to ensure that these individuals are given the necessary therapy and support needed.

What does the decriminalisation of suicide mean? It simply means that whoever attempts suicide will not have liability under criminal law, but perhaps under civil law.

The wait for attempted suicide to be decriminalised in Malaysia has gone on for too long. pic.twitter.com/DpiHL8UdqX

READ MORE: Need Help? There Are Free Mental Health Resources For You In Your Preferred Languages

Photojournalists Save Woman From Jumping Off Penang Bridge