Malaysia has given significant financial and humanitarian aid to Rohingya refugees. 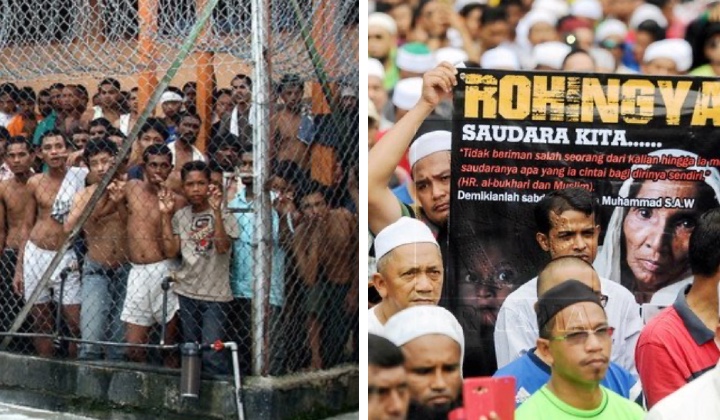 A Rohingya leader said detainees escaped from the Sungai Bakap Immigration Detention Depot after one of them had died.

Rohingya Society In Malaysia (RSM) president Rahmat Abdul Karim told The Rakyat Post that a male detainee fell ill prior to the breakout.

Instead of being sent to the hospital, the detainee was given some pills and died shortly after taking medication.

The death sparked fear among the detainees, who had already been unsettled by rumours of deportation.

Rahmat alleged that his countrymen had also been detained for quite a long time, and overcrowded condition at the depot is not helping.

For context, refugees cannot be deported to their country of origin because it would be breaching international law, according to the United Nations High Commissioner for Refugees (UNHCR).

Rahmat said the heightened climate of fear resulted in some of the detainees becoming restless.

And as some of them protested, they broke the door and the grill.

When it happened, the guards made no effort to stop them as there were only about 20 of them against the more than 600 Rohingyas.

The detainees flee despite despite the darkness of the night and not knowing whih direction to run. One simply follow the other, it was basic instinct.

RSM president Rahmat Abdul Karim on why the Rohingyas fled.

There are still 60 Rohingya refugees who are on the run and the operation to track down the ethnic remnants was still being carried out by the authorities.

Rahmat, himself a UNHCR card holder, called on his countrymen to surrender willingly as they would face harsher penalties if caught.

He said the police had sought RSM’s help to locate the Rohingyas still on the run.

I asked the police to provide a name list of those still being hunted down, but they didn’t. Otherwise it would be much easier to track them down.

On 20 April, a total of 528 Rohingya refugees fled the temporary detention depot on the Kedah-Penang border after breaking the blocked door and barricade grille in an incident at about 4.30 am.

Six of them were killed after being hit by cars while crossing the North-South Expressway.

Rohingyas in Malaysia have become the target of increasing xenophobia and hate speech.

He said false information on social media is fuelling the anger against his marginalised community.

Take the migrants at Selayang Market for example. Less than 10 per cent are Rohingyas, the majority are Muslim Myanmar people from other ethnicities.

Rahmat said Rohingyas have no intention to create trouble, but many are illiterate and come from a tough life back home.

He said some Rohingyas are aggressive because they had been subjected to deep hatred by their own countrymen.

To date, there are more than 100,000 registered Rohingya refugees in Malaysia, while estimates suggest that tens of thousands more remain undocumented.

Rohingya refugees have been arriving in Malaysia since the late 1990s.

Over the years, Malaysian public opinions are increasingly divided on the Rohingyas who fled from Buddhist-majority Myanmar.

Some Malaysians find the Rohingyas too annoying and have crossed the line.

The main complaint is that the Rohingyas are “stealing” jobs from Malaysian workers.

Rohingyas had also been accused of breaking the law with impunity and enjoying healthcare benefits meant for Malaysians.

Social media played an important part in fomenting tension between Malaysians and the Rohingyas.

TRUE STORY FROM THE UNHCR STAFF MALAYSIA REGARDING ROHINGYA REFUGEES

Read until the end, it might change your views forever. pic.twitter.com/BITXWV37ix

What Is The Problem Of Rohingya?

Rohingya is, a term commonly used to refer to a community of Muslims generally concentrated in Rakhine (Arakan) state in Myanmar (Burma).

They can also be found in other parts of the country as well as in refugee camps in neighbouring Bangladesh and other countries.

The Rohingya were denied citizenship in 1982 by the government of Myanmar, which sees them as illegal immigrants from neighbouring Bangladesh.

Since then, Rohingyas have regularly been made the target of persecution by Myanmar’s security forces and nationalist Buddhists.

Their largest exodus began in August 2017 after a massive wave of violence broke out in Myanmar’s Rakhine State.

The conflict forced more than 700,000 people – half of them children – to seek refuge in Bangladesh.

Myanmar has denied accusations of genocide.

As their village burns in the background, a son carries his blind mother on his back for over 60 miles over 2 days to escape the Myanmar army’s brutal genocide of Rohingyas. Photo: Moin Chowdhury, 2017#Rohingya #Myanmar #Bangladesh pic.twitter.com/iii3WRKAD3

How Is Malaysia Helping Rohingya?

As of the end of April 2022, there are some 182,230 refugees and asylum-seekers registered with UNHCR in Malaysia, and about 57 per cent of them are Rohingya.

Like many countries in the region, Malaysia does not recognise the UN Refugee Convention and those caught without papers are considered “illegal” migrants.

Nevertheless, the Malaysian public and aid groups are working to ease the Rohingya humanitarian crisis.

Ustaz Rafi about to distribute food to about 400 Rohingya families within Selayang, Gombak. There are 7,000 households here alone and none receiveing state or federal help. Help, as since forever, comes mostly from donation. pic.twitter.com/tz7ouuCSRJ

They provide direct legal counsel for refugees and people seeking asylum, training and engagement with UNHCR and other stakeholders.

Rohingyas are escaping what the United Nations has described as genocidal violence that follows decades of persecution and human rights abuses.

He said that through the support of the Malaysian public, essential services had been provided to countless Rohingya refugees and local communities.

Rohingyas in Malaysia do not live in camps but reside with the local community as illegal migrants.

The goal is to educate the next generation of Rohingya community leaders.

The Malaysian government had also assisted the Rohingyas directly.

In 2018, the Ministry of Health (MOH) built a field hospital in Cox Bazaar – the world’s largest refugee settlement -in Bangladesh.

MOH was supported by the National Security Council, the Ministry of Foreign Affairs and the Malaysian Armed Forces (ATM).