They were arrested for setting off illegal fireworks. 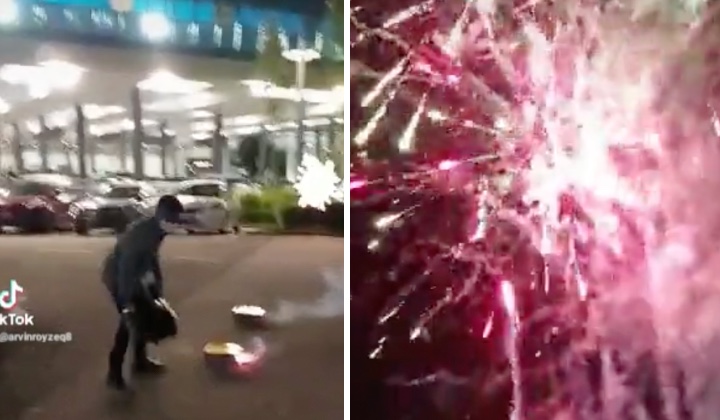 Police arrested a group of five men for celebrating a friend’s birthday by setting off firecrackers.

The guys committed the offence by the roadside near the Setia Alam Toll Plaza.

A video of the incident has since gone viral on social media.

They were arrested at about noon at the Shah Alam district police headquarters.

The suspects were arrested after the police conducted an interrogation and identification of the viral video, and the interrogation is still ongoing. They will be brought to court tomorrow for a remand application.

Investigations found that the incident happened at about 8 pm on May 14 to celebrate the birthday of one of the friends known as ‘Mustafa’.

They also stopped at the toll road to meet other friends.

He said the case was being investigated under Section 6 of the Explosions Act and Section 233 of the Communications and Multimedia Act (CMA) 1998.

Is It Legal To Put Fireworks In Malaysia?

It is illegal to keep, sell and buy firecrackers and fireworks in Malaysia.

The illegal discharge of fireworks is a very irresponsible act.

It can pose hazards to property and can lead to serious injury to users and other people as it could trigger fire or even an explosion.

According to Section 42 of the Explosives Act 1957 and if convicted of manufacturing, possessing or importing illegal fireworks can be sentenced to five years imprisonment or a fine of RM10,000 or both.

Once Upon A Time

Firecrackers were banned in the country in 1991 after the tragedy of the Bright Sparklers firecracker factory in Sungai Buloh.

The incident claimed 22 lives and injured 103 others.

Although the punishment was severe and considered appropriate, the burning of firecrackers and fireworks continued to occur.

Aside from the risk of injury, many do not understand how to make firecrackers and the chemicals in them.

The government does not allow any form of igniting explosive firecrackers or fireworks except from the brand Happy Boom and Pop-pop.