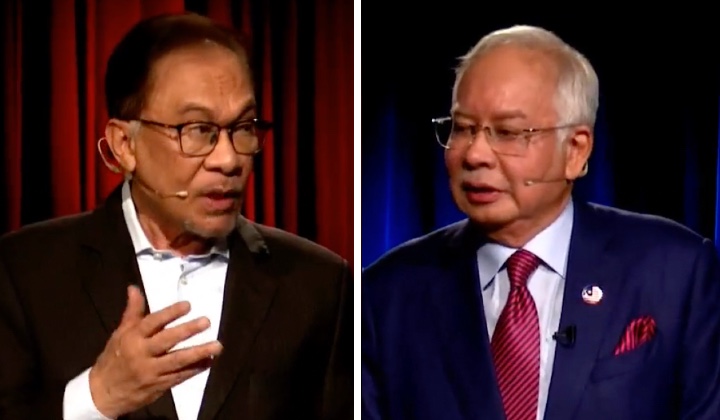 Former prime minister Datuk Seri Najib Razak today not only admitted he holds to the mantra “cash is king”, but also clarified what he had meant by it.

The general conception of cash is king is that it meant giving cash handouts to buy support or to bribe someone.

The way we help the people, the best is by direct cash transfer. When we put money into people’s accounts, they can choose. We give to everyone, we don’t pick and choose, The question of whether the person is a Barisan supporter or not is irrelevant.

Datuk Seri Najib Razak on the real meaning of cash is king.

Najib said the people are free to spend the money the way they see fit, be it buying books for children or groceries.

The Pekan MP said they can even spend it on McDonald’s.

The only thing that matters, he said, is that the people receive aid from the government in a fast and efficient manner.

If the rakyat is in difficulty, we help them immediately.

Datuk Seri Najib Razak elaborating further on what it means by cash is king.

His explanation drew an instant response from netizens, who appeared baffled.

Wallahi this motherfucker is losing his main head and started talking out of his second head. If I had a gun with two bullets and I’m in a same room with Hitler and Najib, I’m shooting Najib’s head, both of it.

Najib was speaking during the inaugural debate between him and Datuk Seri Anwar Ibrahim during which they addressed various hot issues related to the country.

The debate arena between the PKR President who is also the Opposition Leader and the former Prime Minister took place at the MATIC Auditorium this evening (11 May).

The debate between Najib and Anwar touched on two main issues, first is the question of whether the troubled oil and gas company, Sapura Energy Bhd needs to be saved or not.

A survey on Anwar’s official Twitter account found that more than 165 individuals reacted by asking questions, among others, related to the 1Malaysia Development Berhad (1MDB) case and the implementation of the goods and services tax (GST) system.

In the first round, for the Sapura issue, the preamble was 4 minutes and the submission was 3 minutes.

The second round was The Future of Malaysia where the preamble was 4 minutes and the submission was 3 minutes.

The third round was a question and answers session where the debater gave a question to the opponent and the time allotted to answer was 3 minutes. Each question was asked in 1 minute.

The fourth round was the winding up and the debaters were given 4 minutes to close.

The audience was not allowed to clap hands, cheer or jeer during the debate.

The debate challenge erupted after Najib and former PKR vice-president Rafizi Ramli exchanged views and criticism on social media on the issue of the appropriateness of the Sapura Energy bailout.

Its revenue declined to RM4.13 billion from RM5.35 billion due to a lower percentage of completion recognized in the current year, following the recognition of foreseeable losses including a spike in project costs in the engineering and construction (E&C) business segment.

Najib proposed that Petronas take over Sapura Energy and sell back the company for a profit when times are good again.

Another recommendation, said the former Finance Minister, is through a bank loan guaranteed by the government.

He said the move should be implemented immediately because if there is no action by 10 June, the O&G company may be declared bankrupt.

Boom and bust – how Sapura Energy got into the mess it is in https://t.co/7qTl1dGcvA

It was a historic debate in the country as these two important political figures share the stage for the first time in a public debate.

Anwar, who is also the PKR President, via a post on Instagram earlier on, has opened the opportunity for Malaysians to suggest questions to be submitted to Najib.

Of course, Najib did not take lightly the clash tonight.

Not only did he prepare in terms of facts and arguments, but it seems that the famous figure with the title of ‘Bossku’ also ensures that his physical health is at a good level.

Recently, Najib shared a picture of him exercising while wearing boxing gloves.

“Ready. See you in the ring,” Najib wrote in a post on his social media account on Thursday.

As the debate came to an end, another war of words is brewing on the horizon.

There is no love lost between DAP and MCA.https://t.co/2ic3iuI762