Passengers were eventually evacuated to another plane. 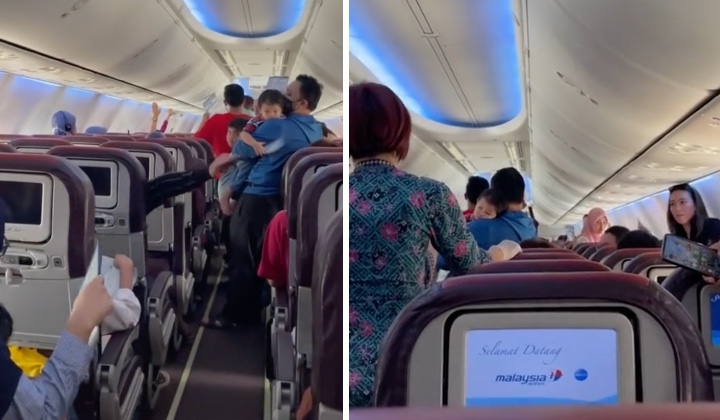 Recently a Malaysia Airlines (MAS) flight failed to take off as the air conditioning was not functioning.

The passengers on board did not like it one bit,  leading to noisy protests.

One of them uploaded recorded the inflight experience and posted it on social media to complain about the air conditioning problem.

Tiktok user @babahnadeen said MAS should change the plane immediately instead of letting the passengers suffocate.

In the video, the flight crew apparently promised that the air conditioning would eventually start working but it did not.

One of the passengers can even be heard saying that it’s such a lousy service by MAS.

In a second video @babahnadeen, passengers were finally evacuated and they were much relieved by the cool air inside the airport.

Meanwhile, another video was also posted on social media in which MAS passengers complained about the AC malfunctioning.

In the 47-second video, a small child was seen crying as well as many other passengers standing and fanning themselves because of the heat.

According to the posting, the aircraft was supposed to fly from Kuala Lumpur to Sandakan, Sabah.

The embarrassment comes after the government said it will bring the airline industry back to life post-Covid-19.

Others said it is no laughing matter and urged Transport Minister Datuk Seri Wee Ka Siong to do something about it.

How Does Air Conditioning Work On An Airplane?

Air conditioning is provided in aircraft for the comfort of passengers. The same conditioned air is also used for cabin pressurization in the aeroplane.

The reason behind turning the AC off is to provide as much power as possible to start the engine.

Most importantly, it is to allocate all the power to engines during take-off which is why any other source of power consumption is turned off.

According to aviation experts, when an extended delay is expected, it is normal to shut down the engines (this saves fuel, reduces emissions and saves money) and use the Auxiliary Power Unit (APU) for electricity and cooling.

When the engines are idle, they do not produce much-compressed air used for cooling which can result in a warm cabin.

As the plane change from using the onboard cooling system to either the APU or preconditioned air or vice versa, there may be a lag, and in hot weather, a plane can get steamy fast.

Failure of an APU in air or ground results in cancellation or delay in flight departure, which inhibits flight operations.

MAS Apologises For ‘Turning Up The Heat’ In Three Airplanes, Leaving Passengers Stranded Without The AC Turned On

How Much Horsepower Does Your Aircond Need To Cool Your Room? Netizen Shares Tips On What You Must Know

[Updated] Snake On A Plane: AirAsia Flight From KL To Tawau Diverted To Kuching