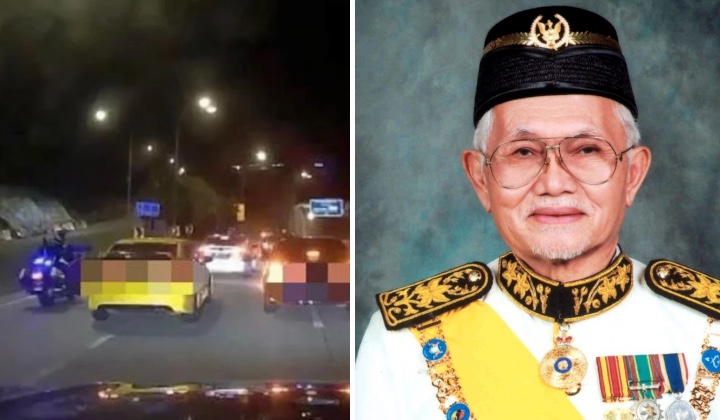 When do you feel like giving way to another motorist during a busy day?

Well, when you’re happy, of course, and also when you hear the siren of any emergency vehicle (ambulance, fire brigade, or police vehicle).

What about VIPs escorted by the police?

Recently, police arrested a maintenance company employee who had refused to give way to Yang di-Pertua Of Sarawak’s escort before driving off in a hurry.

After four days of remand, he was sentenced to 12 days and fined RM10,000 by two Magistrate Courts today.

He was convicted for obstructing the duties of a policeman who accompanied the convoy and recklessly and dangerously driving on the Sultan Iskandar Highway.

The prosecution was filed under Section 186 of the Penal Code which carries a maximum jail term of two years or a maximum fine of RM10,000 or both.

Meanwhile, Magistrate Amanina Mohamad Anuar sentenced him to five days in jail and a fine of RM7,000 and disqualified him from holding or obtaining a driving license for not less than five years.

He admitted to driving a yellow Honda Civic in a reckless manner and being dangerous to himself and road users at 10 pm at the same location and date.

The offence is charged under Section 42 (1) of the Road Transport Act 1987 and is punishable by the same act, which carries a maximum jail term of five years.

It also carries a fine of not less than RM5,000 and a maximum of RM15,000 as well as disqualification from holding or obtaining a driving license for not less than five years.

Aina Azahra ordered the accused to serve the seven-day jail sentence starting from the date of arrest on 7 May or be jailed for three months if he failed to pay the fine.

Meanwhile, Amanina ordered the five-day jail sentence, effective today or jailed for five months if the fine is not paid.

Errwan, who was not represented by a lawyer, appealed for a light sentence.

He earns RM1,600 to RM1,700 and has to support his wife and two children, aged six and three respectively, apart from his new father who died.

According to the facts of the case, on the day of the incident, during a convoy escorted by policemen through the Sultan Iskandar Highway to the Jalan Tunku Abdul Halim exit, a Honda Civic from the rear was driven recklessly in the left lane of the road causing a shift with another vehicle.

Based on 0.53-minute dashboard camera footage, the Honda Civic was moving fast and overtook the convoy through the emergency lane on the left side of the road and ignored the signal by the escort to exit the convoy route.

Spotlight On The Functions Of Police Escort

The case is certainly not the first.

In the past, motorists had been fined for obstructing police outriders and hindering the progress of VIP motorcades.

But recently, the issue of the public and even ambulances being forced to give way to VVIPs had drawn much attention, thanks largely to social media.

Not only do the VIP escorts create a sense of unfairness, there had been accidents as a result.

READ MORE: [Watch] While Trying To Give Way To VIP, Two Cars Got Into An Accident

Such incidents put the police in a tight spot and gave them a bad name.

Many said there is a need to re-examine the VIP traffic protocol which is quite annoying to the public.

The latest incident is no exception, drawing criticism from the public.

The public lauded the action of Tunku Ismail’s convoy for giving way to an ambulance.

The ambulance, operated by prominent social activist Kuan Chee Heng, was on its way from Section 14 in Petaling Jaya to the National Heart Institute (IJN) in Kuala Lumpur.

Najib Has No Handphone While In Prison, Relies On Newspaper For News