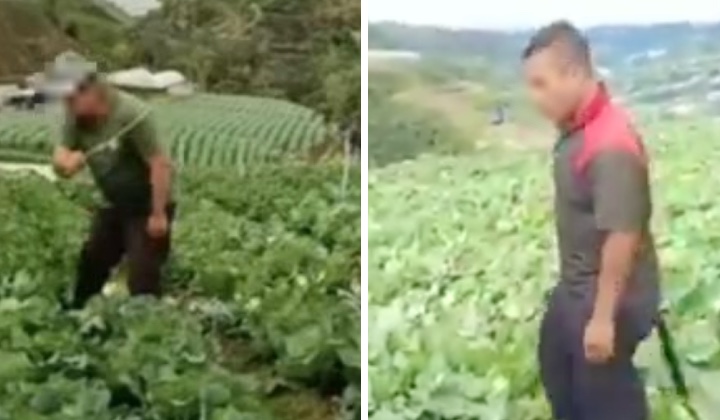 Pahang police are investigating allegations levelled at law enforcement agencies in the state during a land clearing operation in Cameron Highlands.

Police are acting on a video which has spread on social media, including the WhatsApp application, since late last month.

Pahang police chief Datuk Ramli Mohamed Yoosuf said a 36-second video recorded during an operation to destroy crops on state-owned land on December 18, 2019, is being spread around with defamatory and seditious statements.

The video claims that there are corrupt practices in Cameron Highlands and farmers who employ foreigners, especially Myanmar nationals, illegally have to pay the government and the authorities between RM35 to RM40 a day for each worker.

Police are accused of forcing the farmers to contribute to ensuring that the farmers could carry out their activities without interruption. It was also alleged that the authorities would send a group of thugs called the ‘red army’ to destroy the farm produce if they failed to pay money as a lesson to other farmers.

Ramli made the comments during a press conference at the Pahang Contingent Police Headquarters (IPK).

All the statements, Ramli said, were accusatory and believed to tarnish the enforcement agencies and the state government.

Elaborating further, Ramli said the video showing two men pruning cabbage was an enforcement member in charge of clearing the land after the state government revoked the Temporary Occupation License (LPS) on January 18, 2018, and issued a land evacuation notice.

In December of the same year, a follow-up operation took place, involving more than 4 hectares of land.

According to Ramli, the first operation was carried out on 28 August 2019, involving draining two water catchment ponds that could pose a danger to the locals.

He said further investigation was carried out in accordance with Section 500 of the Penal Code, namely defamation and under the Communications and Multimedia Commission Act 1998.

The Cameron Highlands Vegetable Growers Association had also denied the alleged practice or the existence of a ‘red army’ there, while other farmers declined to comment.

Despite the reassurance, some are convinced that lawlessness had been terrorising the farmers.

The Land Where Cash Is King

Allegations of corruption are nothing new in Cameron Highlands, which is said to be a hotbed of politics, corruption, and monopoly.

Too often, the public also hears of other related issues such as illegal exploration, land encroachment, monopoly of foreign workers, the influx of illegal immigrants and various environmental problems.

The culture of corruption in Cameron Highlands had also implicated politicians.

Critics said politicians do not want to speak about such things because most of them have themselves been beneficiaries of corruption.

BN’s winning in Cameron Highlands GE-14 was declared void after allegation of corrupt practices was made against. So what you gonna call this ? What happened to @bersih2’s pledge for free corruption election ? Have PH’s M. Manoharan not signed it ? Is that a ‘Double Standard’ ? pic.twitter.com/IaCeDpq6VX

The bribes are in exchange for enforcement officers to turn a blind eye to illegal land exploration offences.

Letters to @mkini_en: If ever there was a town where corruption is running wild, Cameron Highlands takes the cake http://j.mp/9sYeDS

The federal government had taken steps to battle the rampant corruption in Cameron Highlands.

For example, in 2015, 19 farmers were arrested by officers from the Malaysian Anti-Corruption Commission (MACC) Putrajaya headquarters.

In 2018, a Bangladeshi man pleaded not guilty at the Sessions Court to 2 charges of bribing the authorities.

Don’t Know Where To Go In Cameron Highlands? Try These 20 Places