The restaurant in OUG Parklane was called out by a food delivery rider who expressed concern about the food halal status. 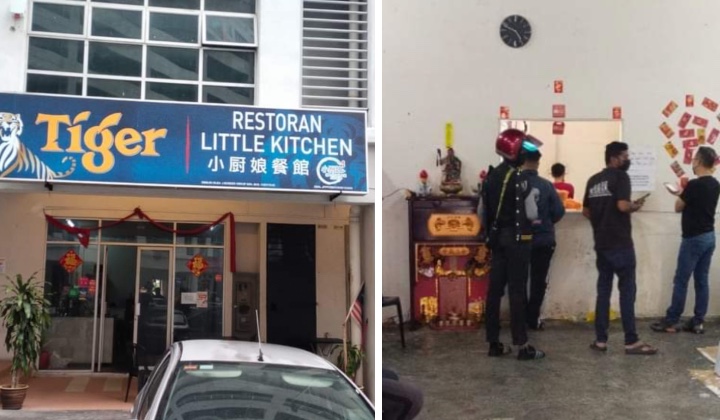 A Chinese Muslim convert from Sarawak was in hot soup when his restaurant in  OUG Parklane was ‘exposed’ by a food delivery rider.

The rider alleged that the restaurant operated by a person named Aadham Fareed and non-Muslim staff wearing shorts.

The rider, named Muhammad Hisyam, uploaded photos of the restaurant on social media.

In his posting, Muhammad said he could not turn a blind eye on the matter as it involved his religion.

Among the pictures is an altar for Tu Di Gong, also known as Tua Pek Gong, and Guan Gong or Wudi, the Chinese god of war.

The exposure had gone viral on social media, as other food delivery riders also voiced out.

The rider tried to warn his customers after he made the discovery because it’s prohibited for Muslims to eat non-halal foods and it is a sin to do so.

Some riders said the shop did not have a halal certificate and that the cook of the shop was a Myanmar national.

Aadham had also been accused of putting up misleading ads which lead to a false impression.

Some demanded that he close down the restaurant until all the concerns had been addressed.

The blame had also been placed on the food delivery company for not emphasizing the halal status of a restaurant registered under its app.

In a tweet, the company involved said the issue has been shared and highlighted to the team responsible for further investigation and clarification.

The Other Side Of The Story

Aadham has since stepped up to explain his side of the story on Facebook.

I am the owner of this shop. My name is Aadham Fareed, and I am originally from Sarawak. Now I am Chinese but Muslim. I’m sorry for changing the brand name. It’s because I want to rebrand and it had been approved by Grab.

He said the Chinese altar is the religion of his family members, and he can’t just throw it away.

Aadham added that it is not an easy path for him as a Muslim, but he accepts the situation as a test from God.

In another posting, he showed a Selangor Islamic Religious Council card confirming that he is a Muslim.

His explanation had not been well received by some netizens.

They felt that he is trying to justify his actions instead of repenting for his mistakes.

A Lesson To Be Taken Seriously, Said NGOs

Malaysian Consultative Council of Islamic Organisations (Mapim) said entrepreneurs need to take care of the sensitivity of the Muslim community.

Mapim president Azmi Abdul Hamid said netizens should be able to educate and advise the entrepreneurs to understand the Islamic guidelines in business related to halal haram law.

It is most appropriate that he be given guidance rather than just attacking and criticizing.

Mapim president Azmi Abdul Hamid calling on the people to give grace to Aadham.

He noted that Muslims are now often touched and offended by things that are considered insulting to Islam.

Therefore, all parties need to consult a knowledgeable party so as not to provoke public anger.

He said food delivery companies should work together with the Halal Division of  Islamic Development Department Malaysia (Jakim) to ensure the halal status of food vendors.

This matter is of public concern, there must not be any misconceptions.

ACCIN CEO Mohd Jamaluddin Shamsudin on the urgency of the matter.

He said appropriate action can be taken based on existing laws, as the issue of halal food is important and sensitive for Muslims.