The family were charged exorbitantly for plain rice and noodles. 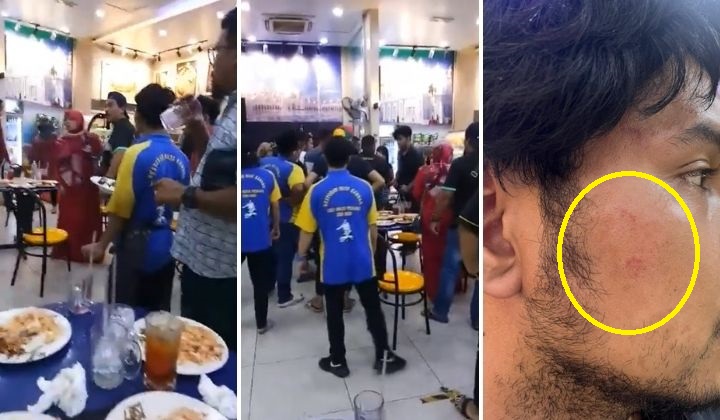 A family meal at a mamak in Negeri Sembilan ended up in a fight due to a dispute over price yesterday, 5 May.

The night started when Twitter user Shahrul (@shahrulnizammm) and six of his family members decided to eat in Restoran Nasi Kandar Liga Maju around 12.30am.

There were not many eateries open at that time so they decided to dine at the mamak because they were hungry.

They planned on ordering fried chicken rice and teh tarik but they were told they could only order teh o ais or sirap ice for drinks.

When the food arrived, Shahrul claimed that they were served a plain dishes without any hint of vegetables so his mother questioned the waiter.

I don’t know. Later you can ask at the counter when you pay.

The cashier said each meal was about RM6.

Its all started when we tried to make payments for the bullshit food they served us.

Shahrul’s mother complained and said even if she reduced all the dishes by a ringgit (to RM5), it’ll still cost about RM45.

Shahrul’s mother said before walking away.

Shahrul was about to pay for the meal when his mum walked away. However, the cashier said something in retort.

Shahrul got angry at the cashier for shouting at his mum and slammed an empty tissue box on the counter to show his displeasure at the poor service.

The cashier and Shahrul argued for a few minutes until one of the staff allegedly came and pushed Shahrul.

Then si cashier and aku maki hamun for few minutes, until one of their gangster come and tolak2 aku. After that was very kecoh. 5-6 people holding my hand and whole body. While the gamgster keep coming to me. pic.twitter.com/SQb6xdzxpn

From there onwards, it became chaotic and Shahrul was held back by five to six people in the mamak while the others hit him on the back and sides.

Shahrul said they kept hitting him until he knocked over another customer’s table and fell to the ground.

He sustained injuries all over his body including his face because he couldn’t react fast enough.

Staff are known to be rude

The situation only calmed down when he called the police and they arrived in less than 10 minutes. Some of mamak staff escaped but the police managed to herd 6 of them into the Black Maria van.

While making the police report, Shahrul was allegedly told by the police that the staff from this particular mamak are known to behave rudely like gangsters. Even one of the policemen had an encounter with them a day before.

However, it seemed like one of the policemen knows the owner of the mamak and pushed for Shahrul to settle with the owner privately.

The owner was willing to pay Shahrul’s family and another group of customers (whose table got knocked over during the fight) compensation for the trouble.

Shahrul’s mother advised him not to settle privately with the owner so that they would be taught a lesson.

Shahrul and his family only got home around 7am after lodging a police report and undergoing a checkup at the hospital.

It turns out that the mamak has received complaints from other customers for bad food and service too.

Are both parties at fault?

Netizens were split about the issue. While they agreed that a fight was bad, they believe Shahrul’s mother should have been more tactful with her comments.

Some netizens advised Shahrul to watch his behaviour and reminded him that he had the choice to walk away as a customer.