Passengers claimed that airline staff were rude and told them to just buy new tickets. 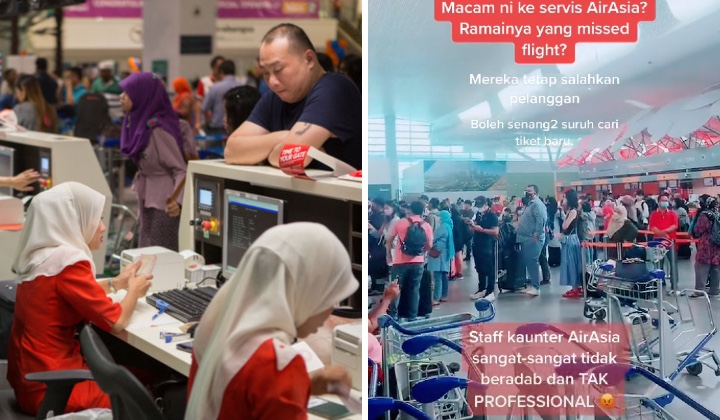 A video showing airline passengers allegedly stuck in KLIA2 after they missed their flights had gone viral.

TikTok user @m.imad050 posted the video on TikTok, saying that he was among those affected.

The passenger said he arrived early to drop off his luggage, but the system was not working and he had to queue at the manual counter.

In addition to multi-hour waits and queues, airline staff were allegedly rude to passengers.

He added that some customers could not find their booking in the system and missed their flight.

His posting prompted other netizens to share their experience.

Another TikTok user @keynaaa_azami said her flight to Kuala Terengganu was cancelled three days before the departure.

As a result, she had to scramble for ways to ‘balik kampung’ at the eleventh hour.

Others claimed that there are too few counters which are open for check-in.

They said this is frustrating because it is holiday season and it turned out to be a nightmare for the many passengers at the airport.

Airlines should have had the resources and capacity to meet the expected demand for holiday flights.

At the same time, some advised that it would be best to arrive as early as possible ahead of the scheduled flight time.

It is generally advised to arrive at the airport two hours before your flight for domestic travel and three hours before for international travel.

Some airlines advised passengers to arrive airport four (4) hours early prior to the scheduled time of departure following the surge of passenger travel during the peak travel period.

Demand for travel is strongly rebounding after the Malaysia’ Covid international travel restrictions were lifted recently.

Netizens urge airlines to reduce the frequency of flights being retimed or cancelled.

Such disruptions could be very costly for passengers due to extra charges incurred, especially for those with connecting flights.

Lessons should be learned from past experience and said there can be no excuse for a repeat of these failings.

READ MORE: Why I Will Never Fly MAS Again [Opinion]