The woman parked her Myvi on Penang Bridge before disappearing. 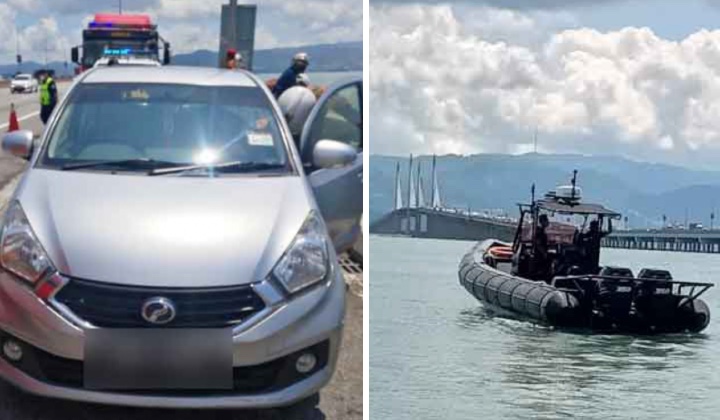 A 47-year-old woman left her Perodua Myvi on Penang Bridge before falling into the sea.

According to authorities, the incident happened at Kilometer 2.8 heading towards the mainland on Friday afternoon.

The information received was then channelled to the Langkawi Maritime Rescue Sub-Center (MRSC) which deployed its boats to search for the woman.

Operation CARILAMAT was activated at 5.30 pm and involved the Fire and Rescue Department, Civil Defense Force and the Batu Uban Marine Police Force.

The victim known as Kung Lai Im is believed to be from Bukit Mertajam.

The search for the victim had to be postponed to 7.30 last night without any clue, and the search will continue tomorrow at 7.30 am.

Members of the public who have any information on incidents or cases of emergencies and accidents at sea can call the 24-hour MERS 999 emergency line or the Penang Maritime Operations Center at 04-2626146.

There had been many incidents on the Penang Bridge.

In March, two press photographers – Ahmad Zhafaran Nasib from The Star and Masry Che Ani from theSun – rescued a woman from falling into the sea at the Penang Bridge.

But not everyone could be saved in time, and lives had been lost over the years.

There had also been similar incidents at the Sultan Abdul Halim Muadzam Shah Bridge or Penang Second Bridge.

The government had since taken preventive measure such as installing loudspeakers to deter suicide attempts.

If you or someone you know is struggling or feeling suicidal, you are not alone. You can contact The Befrienders KL at 603-76272929 (24 hours) for emotional support.