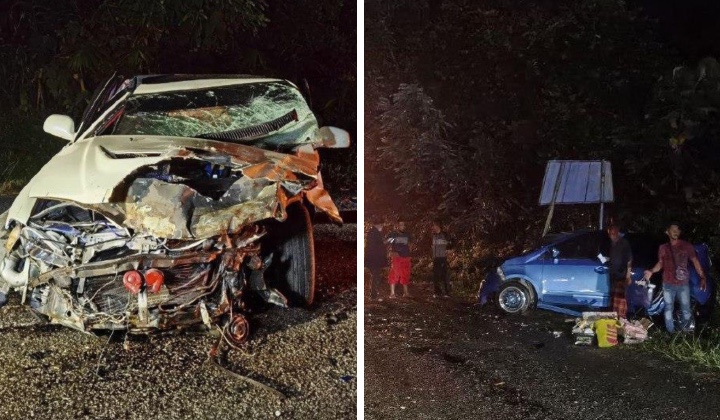 After breaking fast at their mother’s house in Kampung Kalai in Jeli, a family’s journey home ended in tragedy when their car was involved in a fatal accident.

The driver, Mohd Hazlan Ibrahim @ Saleh, 33, died on the spot.

His wife, Norshara Ezila Mohd Asri, 31, and their two daughters, aged 6 and 8, were seriously injured.

Their Perodua Alza collided with a Proton Wira which came from another direction.

Driver Not Found At First

Initially, the driver of the Proton Wira was not found at the location after the incident, and police tried to locate him but failed.

His remains was not found until 7 am this morning when a family member discovered the body in a drain, about 10 meters from the location.

Kelantan Traffic Investigation and Enforcement Department chief Superintendent Shuhaimi Jusoh was quoted by Harian Metro as saying that the Proton Wira driven by Muhamad Baijuri skidded before entering the opposite lane.

The Proton Wira continued to crash into the Perodua Alza, driven by Mohd Hazlan’s, who came from Batu Melintang to Jeli.

The family is understood to have just returned from breaking fast at Mohd Hazlan’s mother’s house in Kampung Kalai.

The bodies were taken to Jeli Hospital for an autopsy.

Mohd Hazlan’s wife was also taken to Jeli Hospital, while his two children, who were injured in several limbs, were treated at Tanah Merah Hospital.

Netizens said trunk roads in Jeli are known to be dangerous due to its poor condition.

They urged the authorities to stop turning a blind eye to the facts and do something immediately.