Al-Aqsa is Islam’s third-holiest site, and the most sacred site in Judaism where it is known as the Temple Mount. 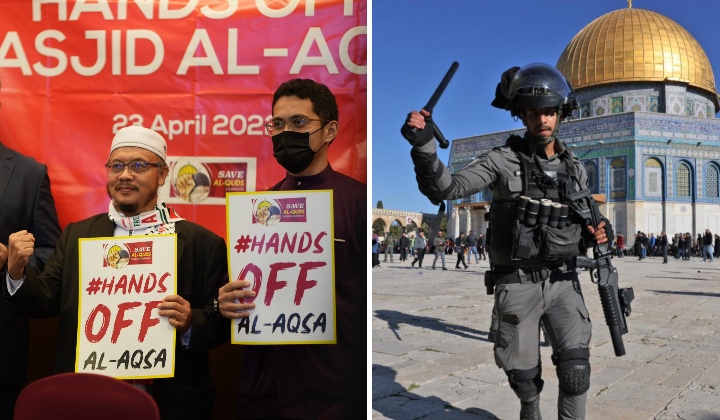 The Malaysian Consultative Council of Islamic Organisations (Mapim) and 43 non-governmental organizations (NGOs) had voiced their solidarity with the Palestinians.

In a campaign called ‘Hands Off Al-Aqsa Mosque’, the NGOs condemned Israel’s recent attack on Palestinians at the mosque during Ramadan.

The NGOs unanimously expressed their support and stood arms with the Palestinians who defend the Al-Aqsa Mosque and other places of worship in the Holy Land.

Mapim president Azmi Abdul Hamid calls on the international community to join in solidarity with the Palestinian people.

He said the Palestinian face an uphill struggle in defending Al-Aqsa, the third holiest mosque of Islam, from Zionist aggression.

We also urge the United Nations and the Organization of Islamic Cooperation to address the dangerous situation at the Al-Aqsa Mosque.

Azmi warned that the violence would lead to further conflict between Israel and militants in Gaza.

He noted that more than 200 people, mostly Palestinians, have been hurt in clashes with Israeli police.

Azmi holds Israel responsible as they had been restricting access to Al-Aqsa, which created tensions that led to clashes.

He also regrets that some Arab nations have warmed up to Israel despite what is happening to their Muslims brethrens in Palestine.

pic.twitter.com/1CmrCdHIPV#Palestinians are beaten every day to death by the Israeli and the entire Arab nations are looking the other way.
The #Saudi is the main ally of Israel and the West.They #sponsor the occupation of Palestine by Israeli forces.
This is how today world works

A Blatant Violation Of International Law And Justice

He said the Israelis, being the occupying force, had been regularly storming the holy Al-Aqsa mosque despite an agreement on who is in charge.

We urge governments, scholars, thinkers, media professionals and others to champion the Palestinians, not as a religious issue but as a matter of human rights.

Ahmad Fahmi, who is also chief executive officer of Global Peace Mission (GPM), said the Malaysian government is doing its best to lead by example.

Prime Minister Datuk Seri Ismail Sabri Yaakob has condemned the actions of the Israeli soldiers as shameful and inhumane.

At the same time, Foreign Minister Datuk Seri Saifuddin Abdullah expressed regret that the clashes also broke out on a Friday, and during the holy month of Ramadan.

Ahmad Fahmi also urged the Malaysian government to continue advocating the well-being of the Palestinians.

The Palestinians are determined to continue the struggle, no matter the sacrifices. As a model Muslim nation with a conscientious society, Malaysians must lend them a hand

But he is confident that if all countries unite and work together to prevent their barbaric acts, it will eventually bear positive results.

He also thanked Malaysia for its commitment to uphold justice and human rights.