The Customs called in the police after they failed to stop the truck. 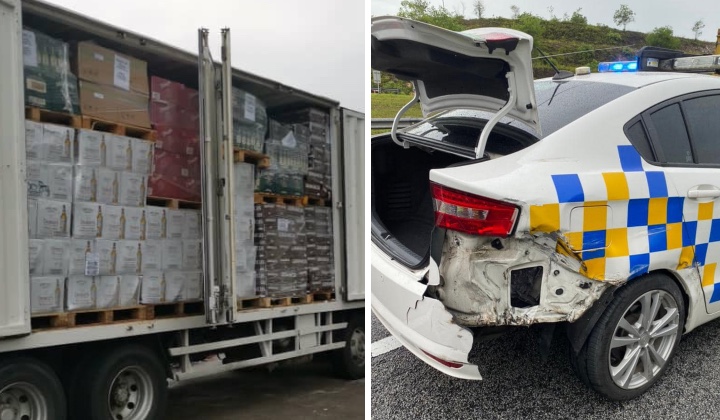 Police had arrested a lorry driver who tried to escape from the custody of the authorities.

The suspect is believed to be smuggling a load of liquor estimated to be worth RM1.8 million.

In a video lasting 1 minute 22 seconds, a Royal Malaysian Customs Department (JKDM) vehicle chased the lorry before the heavy vehicle stopped and backed away.

In the process, the lorry crashed into the vehicle driven by the Customs.

Shortly afterwards, a Customs officer was seen coming out from the passenger window and fired several shots at the lorry to stop the vehicle.

Based on the video, it is estimated that no less than ten shots were fired.

Johor police chief Datuk Kamarul Zaman Mamat said in a statement that the suspect is a 40-year-old man.

The suspect was arrested at Jalan Tuas-Lima Kedai, in Iskandar Puteri, yesterday after police received a call from Customs officers at 1.12 pm to help detain the lorry.

Three MPV patrols went to the scene until a chase incident occurred before the lorry was detained.

The incident started from Jalan Danga Bay up to about 20 kilometres with an estimated time of one hour.

Before being arrested, the lorry crashed into the back of one of the police MPVs, causing damage.

Both the enforcement officers and the lorry driver were not injured in the incident.

At the same time, Kamarul Zaman said the lorry driver is being remanded for ten days until 1 May.

Police are working with Customs to ensure that the remaining members of the smuggling syndicate, including some tonto groups involved, are eradicated as they have threatened the safety of law enforcement officers.

Anyone who has any information regarding the incident can contact the investigating officer at 017-2123370 or visit any nearest police stations.

In 2018, there were concerns that the Customs are not making use of their firearms.

It was reported that JKDM failed to utilize 304 units of firearms worth RM1.5 million purchased since 2015.

The procurement was carried out before obtaining a license approval from the Royal Malaysian Police (PDRM).

According to the Auditor-General’s Report 2017 Series 1 tabled in the Dewan Rakyat today, the situation has resulted in the objective of supplying firearms not being achieved.

To resolve the issue, the Auditor General recommended that a meeting and discussion be held at the top/highest level between JKDM and the police.