Wafa is disappointed with the impatient attitude of the customer. 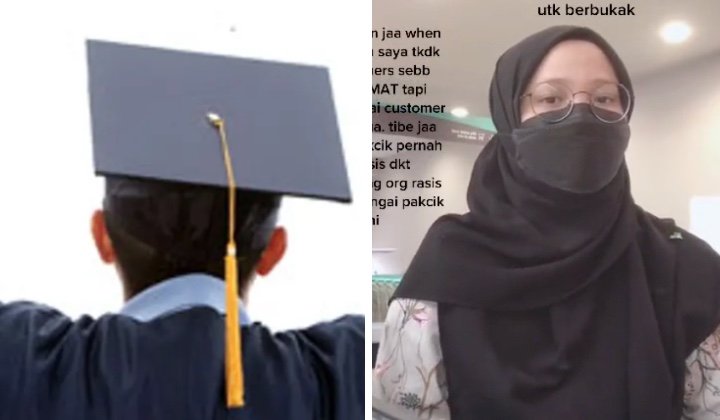 The main challenge for those who work in restaurants is dealing with a wide variety of customers.

The level of patience is undoubtedly more tested when scolded by customers during Ramadan when people are fasting.

Among those who faced such a bitter experience is 18-year-old Wafa Aishah Shaiful Rizam.

Recently, an unruly customer scolded her at a fast-food restaurant in Kepala Batas, Penang.

In an interview with mStar, Wafa said it’s only been three days since she worked at the restaurant when the incident happened.

The customer, who came in at about six in the afternoon, lost his temper when he was told that he needed to wait 45 minutes for his order.

Wafa said she just remained silent and did not give any response after being scolded by the customer, who is elderly.

Following the commotion, which was near the time to break fast, another employee named Fikri came to the counter to calm the situation.

I didn’t think it could be like that. I didn’t answer anything; I was angry with the uncle. Another employee near the kitchen came and asked me why. Before I could open my mouth, the uncle interrupted me by saying that I had no manners and he wanted to see the manager.

The customer was also dissatisfied when Fikri tried to defend his colleague.

Wafa said the customer then boasted he has a PhD (Doctor of Philosophy).

Later on, she cried just before doing her prayer.

Despite the incident of being scolded by a customer, Wafa said it will not break her spirit at work.

Before this, I also worked at other restaurants. But this is the first time I’ve been angry and embarrassed like that in front of other people. But I have no regrets for this job. My purpose here is to earn money to further my studies.

Netizens emphasised with her and criticised the customer for his behaviour.

They pointed out that academic arrogance is harmful not only to the individual who experiences it, but to the scientific discipline as a whole.

Academic arrogance is a belief that because you have spent time mastering a specific subject, you are superior to others.

Why Do PhDs Call Themselves Doctors?

The word is originally an agentive noun of the Latin verb docēre [dɔˈkeːrɛ] ‘to teach’.

You might also encounter instructors with other doctoral degrees such as a Doctor of Theology (DTh), Doctor of Public Health (DrPH), or Doctor of Engineering (DEng).

In 2017, the Higher Education Ministry set up a public database for PhD verification purposes due to a rise in fake credentials.

So many Malaysians with real degrees, masters & phd but somehow we always end up with politicians with questionable qualifications. Why? https://t.co/jki9V9GSvs

The database list the names of all PhD holders and additional identifying information, including where they obtained the degree, field of study, thesis topic, and graduation year.