The man was trying to avoid an angry crowd after causing an accident. 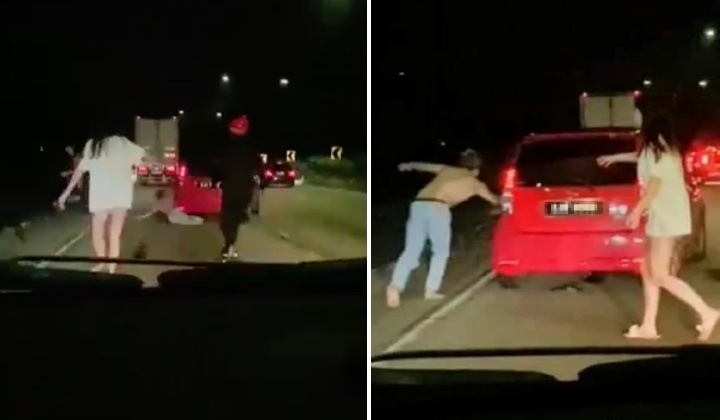 A man who was seen clinging to a Perodua Myvi before being dragged by the car in a video that went viral recently has been arrested by the police early this morning.

The man was detained for further investigations after claiming public members had threatened him.

Accordingly, there was an accident involving four vehicles on the Middle Ring Road 2 (MRR2) near a Chinese school in Jalan Imbi.

In the video, the man was seen trying to cling to the left side rear door pedal of a Perodua Myvi.

Head of the Kuala Lumpur Traffic Investigation and Enforcement Department (JSPT), Assistant Commissioner Sarifudin Mohd Salleh, said in a statement that the incident occurred after an accident involving a pedestrian.

The pedestrian was trying to get into a Perodua Myvi passing through the accident area.

He was worried about being threatened by the public due to the accident.

The pedestrian was taken by a MPV patrol car unit to the Cheras District Police Headquarters (IPD) for documentation purposes as he complained of being threatened by the public at the accident scene.

Preliminary investigation found that the incident occurred at about 2.15 am this morning involving two cars, namely a Proton Exora and a Toyota Vios, two motorcycles and a pedestrian, he added.

The Proton Exora, which was in the middle lane, braked suddenly to avoid a man who suddenly crossed the road.

At the same time, a Toyota Vios came from behind but managed to stop his vehicle.

Suddenly, a motorcycle from behind could not dodge and hit the Toyota Vios and skidded before hitting the Proton Exora. Then another motorcycle came from the same direction and crashed into the motorcycle involved in the accident earlier.

As a result of the accident, the Yamaha-type motorcyclist suffered facial injuries while another motorcyclist broke his left leg.

Both victims were treated at Hospital Universiti Kebangsaan Malaysia (HUKM) in Cheras while the vehicle driver was not injured.

The accident is being investigated under Section 43 (1) of the Road Transport Act 1978 for careless and inconsiderate driving.