Sam Ke Ting was slapped with a heavy sentence, but netizens are divided over the ruling. 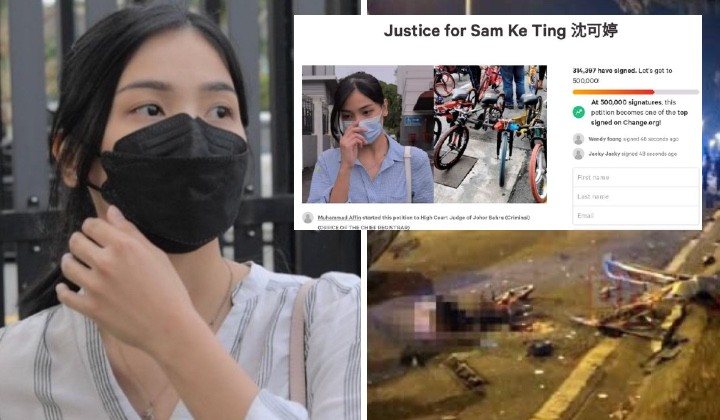 Since 27-year-old Sam Ke Ting was charged guilty in the controversial ‘basikal lajak’ accident yesterday, there has been an outpouring of support for her.

Previously, she was acquitted of the charge in 2017, but was charged a second time after an appeal was made. This time, she was found guilty and has been sentenced to 6 years of jail and a RM6,000 fine, in addition to losing her driver’s license.

With the new ruling, Malaysians are once again divided, with some finding it ‘unfair’ while others feel that it’s right.

Petitions To Get Her Out

Multiple petitions have been started by the public to seek justice for Sam Ke Ting, such as this and this, which argued that the charge was unfair and that she is innocent.

Both petitions noted that in magistrate Siti Hajar Ali’s judgement in 2019, Sam proved that she was driving responsibly, and that it is only reasonable to not expect children on modified bicycles on the dark hilly roads at 3am.

As is with any controversial topic, people are divided on the new ruling.

Many deem it unneccesarily harsh, especially when compared to other high-profile court cases, which also brought into question the impartial standing of the judicial system.

If you have no power,clout or cash even legit forensic evidence will not be able to save you.

No wonder Nikki Low & Rohana feeling so complacent despite incriminating evidences against them.

Many more wondered why there were 30 kids on the highways at 3.30am anyway, suggesting that it could be parental negligence.

Basikal lajak is illegal in first place and it's dangerous. It's parents' responsibility but neglected when they kids are on highway at 3am. You expect a driver to expect that to be there? But driver in jail for being innocent?

The audacity lol… you should be jailed for failing to educate your kids. Why blame your own mistake on someone else? Who tf forced your rempit kids to ride basikal lajak at 330am???

However, some find it justified as it resulted in the death of children, though there were also those who argued that her driving was not reckless.

Define reckless please. She was driving within the speed limit. She was not intoxicated. There was a bend in the road. 8 bicycle lajaks racing at 3.30am in the morning.

Sam Ke Ting's car was overturned. She could have died in the accident.

THIRTY kids on basikal lajak were hogging the whole highway — they broke traffic rules, not Sam.

If I had a kid, I'd make sure they're not out endangering themselves (and others) at 3am. https://t.co/LNUGh1P5jv

It's devastating to lose your child, definitely. Understandable to seek justice as a form of closure.

Though something rubs me the wrong away about glossing over the fact that basikal lajak is indeed a dangerous activity for kids to partake in, especially with how its practised.

Regradless of where you stand, the entire situation is a messy one that is a tragedy for everyone involved.