Sam is sentenced to jail after the case had dragged on more than five years. 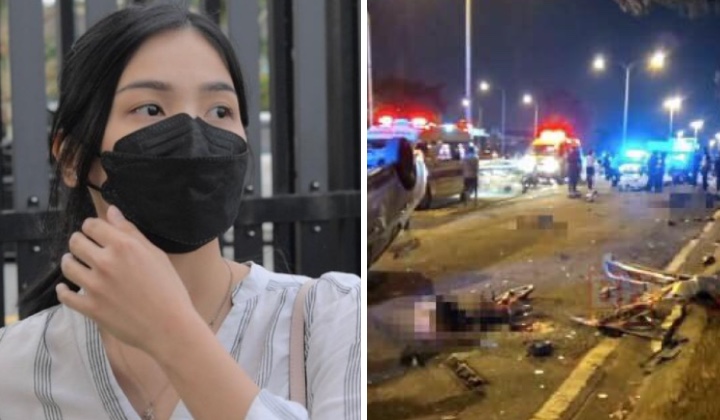 It thus set aside the decision of the Magistrate’s Court on 10 October 2021, which upheld the decision to acquit the respondent of the charges.

The respondent, Sam Ke Ting, 27, is also ordered to serve a six-month jail sentence if she did not pay the fine.

She is also disqualified from driving for three years, effective after completing the jail sentence.

Judge Datuk Abu Bakar made the decision during the appeal of the case in the High Court today.

Abu Bakar, in his decision, said the respondent was found guilty and convicted her on the charges after going through a full trial and not a guilty plea case.

He said the court took into account the submissions of the relevant parties and considered various factors such as public interest.

The respondent’s act of driving recklessly or dangerously resulted in the loss of eight lives. The offence committed by the respondent is a serious offence.

Judge Datuk Abu Bakar on the seriousness of the offence.

He said Parliament has amended the punishment for this offence in 2020 through the Road Transport (Amendment) Act 2020.

The respondent is fortunate because the crime was convicted in 2017 before the amendment was made, said Abu Bakar.

The court also considered that the offence committed by the respondent is high in Johor, with statistics showing that there were 10,297 deaths in fatal accidents between 2011 and 2021.

Based on that, the court sentenced Sam to six years imprisonment from the date of conviction today.

There is also fine of RM6,000 which carries an additional six months imprisonment if she fails to pay.

The respondent was also disqualified from holding a driving license for three years upon completing her prison sentence.

Sam failed to stay her jail sentence when the judge ordered her to be jailed from today as no High Court leave for a stay appeal had been made.

Earlier, when reading out the appeal decision of the case, Abu Bakar noted that the High Court ordered Sam to defend herself on 18 February 2021.

The decision came after the prosecution filed a notice of appeal on 10 November 2019 against the Magistrate’s Court’s decision.

The Magistrate’s Court had acquitted and released Sam during the trial in August 2017, which saw 46 prosecution witnesses and 214 exhibits presented in court.

Magistrate Siti Hajar Ali made the decision to acquit Sam on 28 October 2019 without calling on her to defend against the charges, after the prosecution failed to prove a prima facie case at the end of the prosecution case.

The magistrate court was found to have erred in reconsidering the issues raised at the end of the prosecution case.

The issues concerned the driver’s identity of the car, the admissibility of the exhibits, and the lack of identification of victims.

Abu Bakar said the court also erred when it failed to decide the respondent’s defence without being under oath.

The respondent, in her defence, stated that she did not see the group of cyclists at the scene of incident and there were other vehicle that hit the deceased bicycles and drove away. This version had never been raised by the respondent during the prosecution case.

Judge Datuk Abu Bakar on setting aside the magistrate court’s decision to discharge and acquit the respondent.

As such, the court ruled the respondent guilty and convicted on the charge.

Earlier, the prosecution requested that the court impose a sentence commensurate with the principle of public interest, citing an increasing number of fatal accidents in the state every year.

The defence, however, appealed for the court to impose a lenient sentence as this was the respondent’s first offence, and she is taking care of both her parents.

Earlier, Sam, who was wearing a black striped white shirt and cream trousers, was accompanied by a friend when she arrived at the Johor Bahru Court Complex at 9.50 am this morning.

Johor State Director of Prosecution at that time, Amir Nasruddin, said that his party filed the notice of appeal after finding and believing that there was merit in filing the notice on several issues.

Based on the charge, Sam was charged with committing the offence at Jalan Lingkaran Dalam, Johor Bahru, at 3.20 am on 18 February, 2017.

Sam was charged under Section 41 (1) of the Road Transport Act 1987, providing a maximum jail term of 10 years and a fine and a suspension of driving license if convicted.

Sam’s trial has become a tragic tale that has captured the nation’s attention, with more questions than answers remaining.

People also pointed out that some individuals are still free to go about doing their things despite being convicted by court.

I am shocked to notice that Sam Ke Ting had been denied bail pending her appeal but on the other hand NAjib is free to go everywhere he likes despite being convicted twice by the high court and court of appeal. Justice must not only be served but it must be seen to be served. pic.twitter.com/kIq4vafCI0

Many people feel that justice will not be served until the parents of the children are also held responsible.

They said parents are duty-bound to ensure their children are not left out until late in the morning and get caught up in unhealthy and life-threatening activities.

The authorities should also carry out more operations to curb this activity, arrest those involved and send them home so that parents know their children are caught in dangerous activities.

Meanwhile, MCA has offered legal help to Sam without any charges.

The MCA Legal Bureau will be contacting Sam Ke Ting's family to offer our assistance in her appeal pro bono. https://t.co/TSAi38iaBU

For matters that originated at the High Court, the final level of appeal is before the Federal Court.