The trader tried to gain the public’s sympathy by saying he has no money to celebrate Hari Raya with the family. 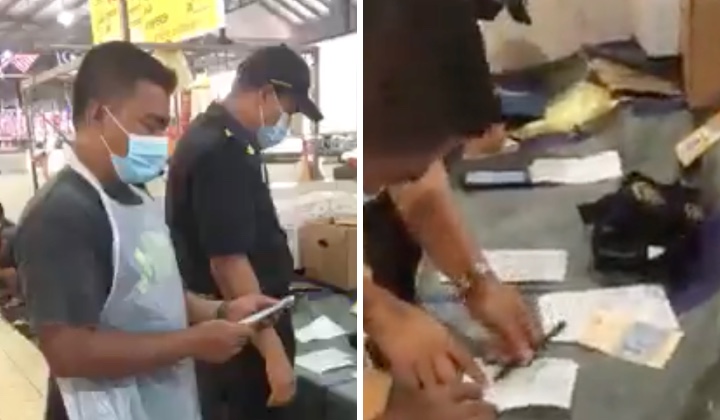 Recently, a video showed a chicken trader expressing frustration after being sued by the authorities.

Through the video, the man said he had to pay the fine using the money he had saved to buy Hari Raya clothes for the family.

The Domestic Trade, Cooperatives and Consumerism Ministry (KPDNKK) had fined him for selling chicken more expensive than the set ceiling price.

However, a woman came forward to tell the real story of why the authorities issued a summons against the trader.

According to her on Twitter, many have become ‘victims’ of the trader, including her family.

The woman also said that uploading a video showing – in which the trader showed the money to buy Hari Raya clothes for the family – was only to gain public sympathy.

When you cheated us on the price of the chicken, didn’t you think that the money was halal or haram?

The chicken trader’s customer expressing her anger and scorn.

She further explained that the traders at the market had displayed the price of chicken at RM8.90/kg, but when customers bought, they weighed in at RM10/kg.

I understand the worries of profit a little, but why do Muslim traders feel innocent of cheating on such prices?

The chicken trader being scolded by a customer for cheating.

Accordingly, the traders in Pasar Chabang Tiga, Kuala Terengganu were all issued a fine by KPDNKK for price fraud.

A Twitter user who claimed to be one of the chicken traders said they were forced to put up the signs to avoid paying a fine.

He claimed that the honest traders would inform their customers verbally that the price is not the same as displayed.

Lately, the complaints and grievances about the increase in chicken prices have increased.

Many consumers had to pay a higher than the ceiling price of RM8.90 per kilogram.

The problem had seen the buck being passed around between chicken producers, traders and the government.

As a mitigating measure, the authorities started taking action against errant traders.

On 9 February, the government announced a subsidy of 60 sen per kilogram to poultry farmers.

Taking into account the price of live chicken at the farm level of RM5.90 per kilogram, the retail ceiling price of standard round chicken is set at RM8.90 per kilogram for the period until June 5.

The Cabinet also agreed to provide a subsidy of five cents per egg for all categories.

“Just Grow Your Own Vegetables And Chickens” Says Perak MB