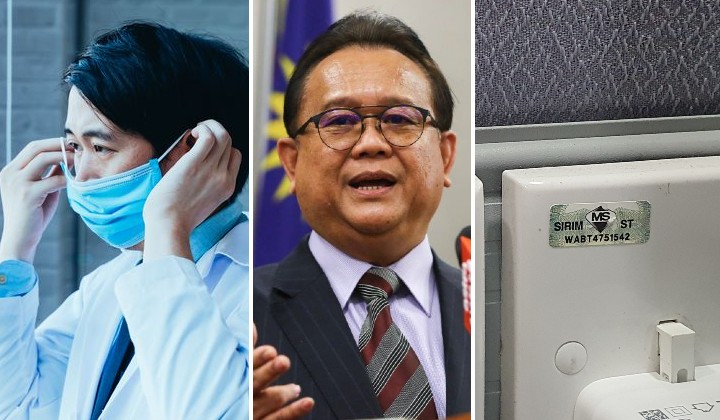 When a Sirim requirement for face masks was first announced earlier this week, Malaysians were not pleased. The new gazetted law would have taken effect on 4 July 2022.

Among the complaints, many questioned the reasoning behind the move, criticizing the time given for manufacturers and importers to obtain the SIRIM sticker as being too short and worrying that the price of face masks would increase.

However, according to Malay Mail, the Domestic Trade and Consumer Affairs Minister Datuk Sri Alexander Nanta Linggi announced that the Sirim requirement will now be postponed to take effect only on 2 January 2023. Additionally, the requirement will also apply for non-medical grade cloth masks as well.

He says that this postponement was decided as the government is sensitive to the people’s concerns.

Alexander has also given his reassurance that face masks will not see a price hike after the implementation of the Sirim accreditation.

A stern warning was issued to all local manufacturers and importers to not take advantage of the situation and raise prices of face masks.

He says that the ministry hopes that implementing a price ceiling will not be neccessary and that the industry will be able to self-regulate and use fair pricing.

He assures manufacturers and importers that there will be no need to raise prices in the first place, as Sirim has discussed a very cheap charge for the accredidation of face masks.

So, Sirim gave an assurance that the charge will be very cheap, very low as Sirim too is caring towards the people, knowing how important face masks are. So they will make their charge cheap, as per what was notified to me just now.

No Fines For Consumers

Alexander also clarified that the new rule and punishments are not directed towards consumers.

I want to stress something here. Offences, should there be any, have no link to the consumers. Consumers will not be given any penalty. Just that this gazette, this law, if there is an offence, the huge fine is to the importers and the manufacturers. So consumers, don’t worry.

The misunderstanding arose when there were different punishments for companies and individuals. However, it is only meant for companies or individuals who manufacture or import face masks for sale in Malaysia (including cloth masks).

Alexander assures consumers that even if they wear masks that do not have Sirim accreditation, such as those currently on the market, they will not be fined.

The main reason why the Sirim requirement is needed is because they want Malaysian non-medical face masks to be certified to the accepted international standard.

This is because the availability of face masks in the country is already adequate, so they are expecting more exports of Malaysian-made face masks. As such, they want to ensure that these locally-made products have an international standard, such as the Sirim accreditation, which is accepted by the World Trade Organisation (WTO).

As for why it was only implemented now, two years after the pandemic, Alexander said the issue had already been planned for since 2020 and WTO was consulted for approval before the new law was put in place.