The modus operandi is to inform the victims that they had tax overdue via a via a fake official letter. 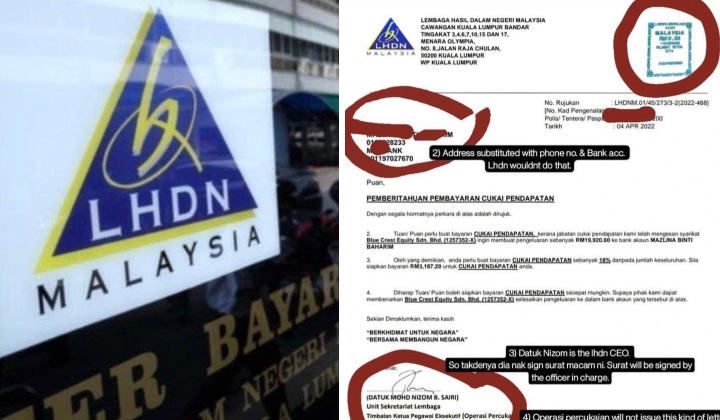 The fake letter contains the victim’s details, including banking information and the amount of tax due to be paid, complete with the signature of a fake LHDN officer.

However, victims can identify these fake letters as LHDN adheres to a specific format in its letters.

Any tax payments must also be made directly to LHDN’s account and not through an individual’s personal or third-party accounts.

A Twitter user, @frugalmy, shared the experience of a friend who received such a letter.

In the fake letter, the syndicate used the LHDN’s logo and even stamped it to create an air of legitimacy to their demands.

The victim is asked to pay a sum of money said to be tax arrears.

my friend who works in lhdn shared some advice on how to detect lhdn scams pic.twitter.com/rQf0HxLSVq

Netizens said such a tactic works as some people do not declare their taxes and fear the authorities.

People could also become a victim if they are not well-educated.

At the same time, some netizens suggested the use of smartphone applications that have caller-identification features.

The line was cut off and when I called back the same number, a policewoman in Kota Bharu casually said none of the people I spoke to worked there and this LHDN scam is wildfire rn. I've since downloaded Truecaller at the advice of the policewoman who took down my report.

Taxpayers should take this matter seriously and be careful with every dubious call, email or letter by getting confirmation from the LHDN first.

In the past, many victims had been scammed by fake taxmen.

In a short period between 1 January and 9 February last year, 18 reports involving RM636,311 in losses were lodged.

Besides sending letters, scammers have also called up victims while pretending to be LHDN officials.

Scammer menyamar sebagai @LHDNMofficial memang suka marah-marah if we call their bluff.
My recent experience, he was fuming when i asked him my tax number.

"If you are LHDN,
What is my tax number?"

For more information, you can visit LHDN’ official portal here and access the HASiL Live Chat.

Any questions and feedback related to this matter can also be channeled to LHDN through its Care Line at 03-89111000, live chat, feedback form on the website.

Chef Loses RM7k Despite Not Sharing Out The OTP, Nearly Lost Another RM10k