Irdina Shahriman consistently scores 4.0 GPA which is the highest. 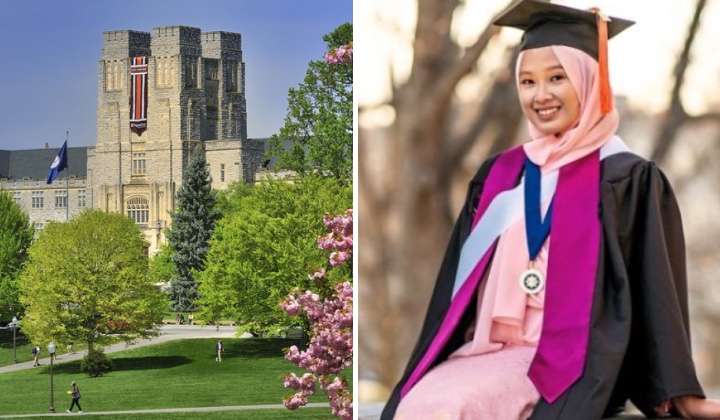 Despite her initial concerns about studying abroad, Malaysian student Irdina Shahriman achieved success by being the top student.

She maintained her performance throughout her study for a Bachelor of Science in Electrical Engineering at Virginia Tech (VT) in the United States from 2018 to 2021.

VT is a research university with its main campus in Blacksburg, Virginia. It ranked #75 in US National Universities and among the top 100 in eight subjects.

The achievement enabled her to lead the pace for several years, as she ranked first among nearly 10,000 students.

It also saw the 24-year-old receive the Phi Kappa Phi medal for the College of Engineering – an award awarded to senior graduates with the highest academic achievement.

1/ Congratulations to Irdina Shahriman for receiving the Phi Kappa Phi medallion for the College of Engineering – the award is given to the graduating senior with the highest academic standing. @virginia_tech
🔗 https://t.co/Ni55bKmeMA

Recalling her journey, Irdina, who graduated in December last year, said her perseverance and belief in herself had helped her overcome her fear of trying and making mistakes.

In an interview with StarEdu, Irdina said she is not a ‘genius’ by nature, so she works hard.

I don’t skip classes, I take notes diligently, and more importantly, I take the initiative to connect with professors and my classmates, which improves my understanding of the matter.

Irdina Shahriman on her success recipe.

She said the most important thing is to live the learning process and always set your intentions right and translate them into action.

Why Everyone Wants to Study in the US

Irdina said the university put a lot of emphasis on expressing one’s views, be more creative and thinking outside what is being taught.

For example, there were times when I was informed that there was no format for laboratory reports, and they had to be written according to my preference.

Irdina Shahriman on education at the university.

As someone who always works in a structured environment, that pushes Irdina out of her comfort zone.

She added that the U.S. academic system requires students to be consistent in their studies because they typically have exams twice a week.

Some days, she had to cancel plans to go out with friends or watch the latest movies.

Back then, weekends and weekdays were no different to her. Her time is spent completing assignments and studying for exams.

Irdina dislikes procrastination and would always remind herself of her purpose, which has allowed her to adjust to the male-dominated environment in her faculty.

Throughout her time at VT, she never had a female group member in her group project, which sometimes scares her.

While her studies are her priority, Irdina also spends time on some co-curricular activities and acknowledges the importance of self-care.

Her lifestyle at VT consists of sleeping eight hours a day, exercising, and eating home-cooked food.

Know your boundaries, and don’t get too tired, she said.

The experience in the US has helped her find herself and the ability to weather adversity independently.

It also exposed her to different cultures and new friendships.

Irdina, who hails from Subang Jaya, Selangor, is currently waiting for a placement at Tenaga Nasional Berhad.

I am excited to continue my career in power engineering and contribute value to the country’s energy transition towards a more sustainable source of electricity.

Irdina Shahriman on her vision and mission.