Ong cycled to save on petrol which is getting more expensive. 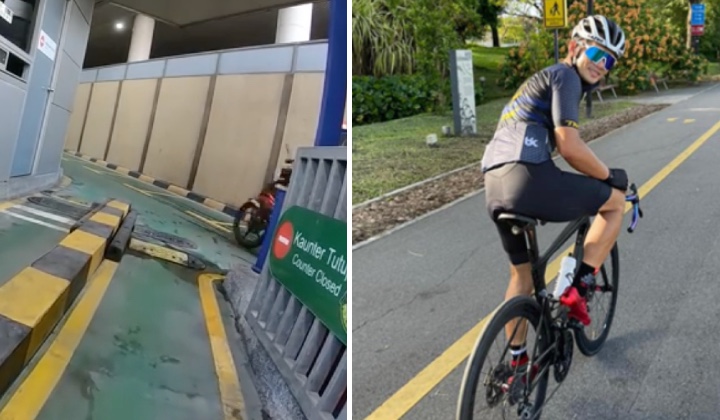 Malaysians working in Singapore are coming back home after the border fully reopened after two years.

Among those enjoying the long-awaited freedom is Mars Ong, an avid cyclist.

The 40-year-old cycled a distance of 134.8 kilometres over four hours.

He stopped for a meal at Pontian, and made several other pitstops to rest and rehydrate along the journey.

Ong even bought some fried carrot cake back home for his wife.

He wrote that the petrol prices have become “too expensive” and so he decided to save up on petrol costs by cycling all the way to his hometown in Batu Pahat.

Ong recorded parts of his journey, included the moment when cycles through the immigration complex.

A Malaysian immigration officer – bemused at his mode of transportation – had a friendly exchange with him.

Ong describe the journey as smooth and all that is needed to cross the border was his passport.

He also extended an invitation for like-minded cyclists to join him for similar road trips in the future.

Family Did Not Know He Was Cycling Back

He started cycling at around 7am and arrived at his destination at around 1pm.

His family had been waiting for him but they had no clue he would come home on a bicycle.

The family members were concerned, given the risk of long distance cycling.

While Ong was clearing immigration at the motorcycle lane, a Malaysian immigration officer walked into frame.

While cycling between Singapore and Johor Bharu is common, going all the way to Batu Pahat is a different ball game.

Ong’s final destination of Batu Pahat is much further away up north of Johor Bahru.

He advised those who wanted to embark on long distance cycling to ensure they have adequate stamina and fitness.

He added that cyclists need to anticipate and prepare for dangerous situations during the journey such as a flat tyre and cramps.

Ong also highlighted that he developed tan because of the rides, although that would be probably be of least concern.

As an avid cyclist with six years experience, Ong had been cycling a lot way before his recent trip back to Batu Pahat.

He had participated in cycling events and competitions, and continued cycling during the pandemic.

Ong shares his cycling adventures on Strava, a mobile app and website that connect millions of runners and cyclists.

At the same time, Ong told China Press that he usually travel back to Malaysia by car.

For his upcoming return trip to Singapore, his wife will send him by car to Johor Bahru due to safety concerns.

From there, he will cycle into the republic.

Many netizens were impressed with his feat and some even called on Ong to lead cycling convoys.

At the same time, some are concerned about the risks including falling victim to crimes.