Come rain or shine, the faithful dogs have been waiting to see its beloved owner once again. 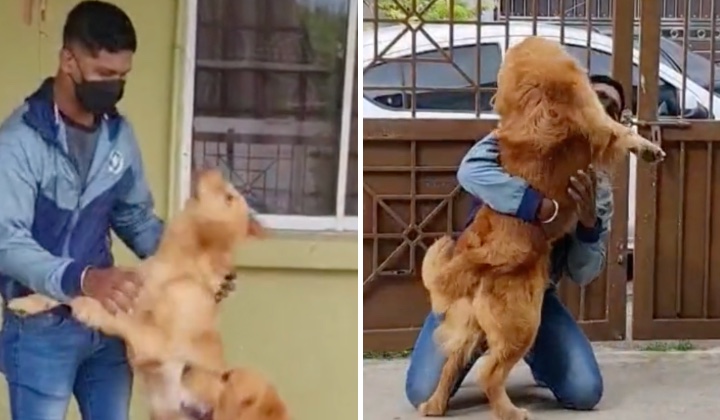 It’s never easy to bid farewell to our pooches, and they feel the same way too.

For the past 486 days, two loyal pets named Simba and Naala have been patiently waiting for the return of its owner, TikTok user @Paandichelsea.

@Paandichelsea had been away in Singapore for work and was unable to return as the border was closed due to Covid-19.

Having been away from the family, the first thing that he did when the border reopened was to return home.

His family express great joy at his return, and so was the pet dogs.

His golden retrievers make a really big deal of him returning home; they jumped on him, and whizz around the house in glee.

A Friendship As Old As Time

Netizens were touched at the the amazing love that the golden retrievers and @Paandichelsea share with each other.

They were moved by the infinite loyalty and unbreakable bond between the dogs and their owner.

The dogs’ unconditional love for their owner left some cat owners wondering if their pets would react the same way.

How Long Do Dogs Wait For Their Owners?

None of us want our dogs to be miserable, yet we can’t be with them all the time.

But can dogs tell the difference between minutes, hours and days?

A study, which compiled fMRI data on different dogs, found that canines have some grasp of time.

According to the research, pooches greeted their owners with more gusto after two hours than 30 minutes.

However, when researchers measured the dogs after four hours, they found no difference.

While the science may be far from conclusive, dogs have certainly proven to be faithful and friendly to human beings.

The emotional story of Hachiko is perhaps the most famous story of the love a dog has for his master.

unwavering loyalty to his deceased owner.

If you want to watch an Authentic Version of the Story I recommend the 1987 Original Hachiko Monogatari. 🇯🇵 (5/5) pic.twitter.com/xJQUxh03uG