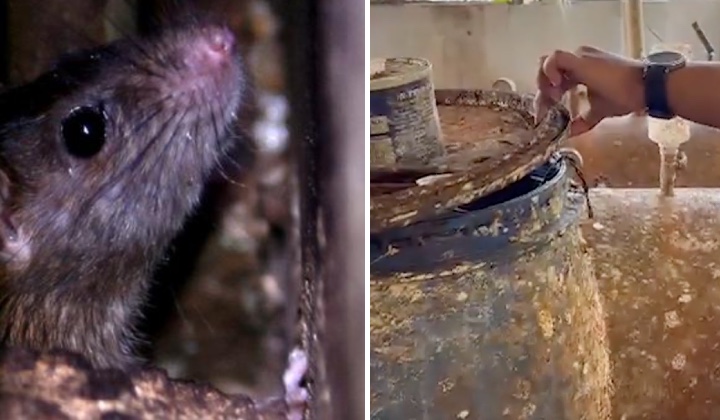 Rat droppings on tables are among the discovery made by the Penang Health Department (JKNPP) enforcement team when raiding a factory processing soy-based products in Batu Lanchang.

During the inspection, the enforcement officers also found the rodents in the dry material store room at the premises.

In addition, they also found some of the soybean processing machines to be rusty and slimy due to the machines being poorly maintained.

Even more disgusting, the inspection also found that the toilet at the premises did not have a door and it was located close to the food product processing area.

Mohd Wazir Khalid said the premise, which had been operating for more than 10 years, also did not comply with hygiene rules.

For example, the workers hung their clothes by the food processing machine.

The premise was inspected two years ago and was penalised with fines due to unsatisfactory cleanliness levels. After observing and monitoring the premise, we conducted a surprise raid today.

Mohd Wazir Khalid on the raid conducted against the soy products factory.

The raid was part an operation dubbed Ops Tegar 2.

Mohd Wazir said the presence of rodents raised concern of rat urine infection on the food produced at the factory.

He added that buckets, believed to be used to store soy products, were also placed in toilets under disgusting conditions.

At the same time, it was discovered that foreign workers at the factory would eat, sleep and cook at the same place where they process the soybean products.

It is indeed an offence because the premise owner neglected the hygiene aspect in carrying out food processing operations. Therefore, we issued three notices including a closure notice against the premises.

Mohd Wazir Khalid on the offences committed by the soy products factory.

Authorities also issued a compound amounting to RM5,500 for not complying with the hygiene requirements.

According to Mohd Wazir, the factory owner cited the lack of manpower and could not carry out cleaning work at the factory.

The factory is operated by three employees including two foreigners.

In another development, Mohd Wazir said a noodle and kuetiau manufacturing factory in Jalan Perak was also ordered to close for 14 days after failing to meet hygiene requirements.

S’wak family concerned of dead body in house, calls Bomba for help. Turns out to be dead rat