The professor asked her student to sell off any family jewelleries and use the money to buy a computer. 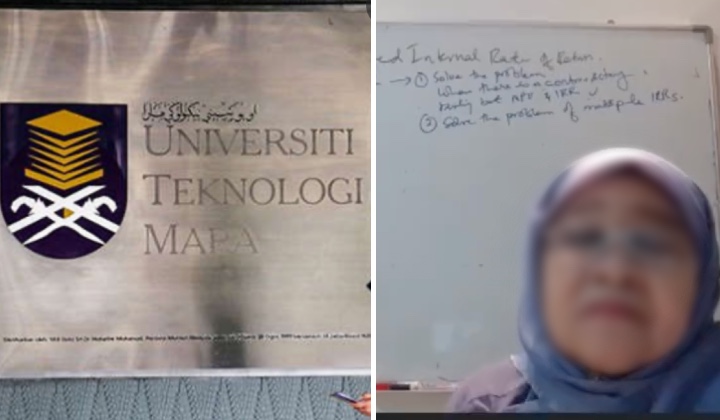 Recently, a 1 minute 45 second video showed a professor from Universiti Teknologi MARA (UiTM) berating a student for not having a laptop.

The professor, who was teaching in an online class, posed some questions to the student.

When the student was unable to give the correct answer, she asked the student on what he is using for the class.

The student replied that he did not have a laptop, which drew a barrage of rude criticisms from the professor.

The professor questioned the financial well-being of the student and his family, including his parents and siblings.

The student, who is from Seremban, answered the questions one by one.

He stated that his mother had passed away, while his father is not working and he has other siblings that need to be looked after.

Rubbing Salt In The Wound

The professor continued to make the situation even worse for the student.

She asked the student to find out if his sister has any jewelleries, and sell it to get a computer instead as it is a very important tool for study.

After this, I will teach you to excel, because of that you will be a drop-out student. It’s semester five and you don’t have a computer. I rather not have clothes, I only have five pieces of clothes. The most important the computer is very-very important.

The UiTM professor berating her student for not having a computer.

She continue to lambast the student for not getting a computer, adding that it only costs as little as RM800 to get one.

That’s why I can’t sit with a B40. They think more about other stuff rather than education.

The UiTM professor shaming the B40 before instructing her students to switch off there camera.

The video clip invited an avalanche of angry reactions from netizens.

They are indignant at the professor for disparaging the B40 group.

The backlash was so great that the posting was deleted, but netizens would not let it go.

The fiasco had also drawn the attention of politicians who weighed in on the matter.

Meanwhile, the Higher Education Ministry had also promised to look into the matter.

While the ministry are still mulling on what to do, netizens demanded that the professor be sacked.

Blood Is Thicker Than Water

Despite the overwhelming barrage of criticism, a Twitter user @FarahAmiraAH stepped out to defend the professor.

At the same time, she called out netizens for scolding and taunting her aunt.

The tweet was later deleted, most likely due to overwhelming backlash.

Due To CMCO, Unemployment Rate Among Heads Of Households Doubled In KL’s Low Cost Flats

Meet The Malaysian Cardiologist Who Just Made History At Oxford University