Thankfully the elderly woman was not seriously hurt despite her attempts to resist the robbers. 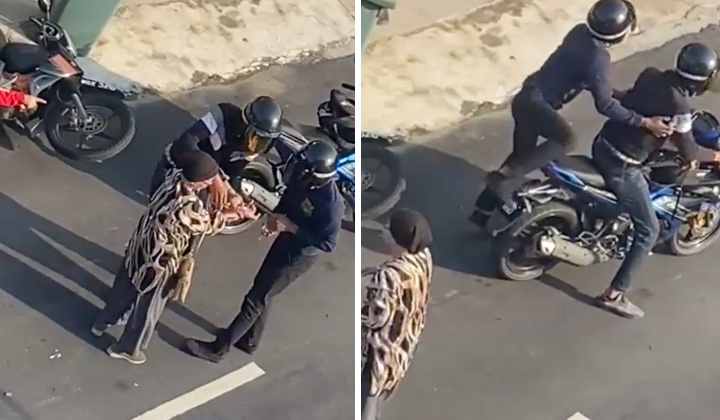 An elderly woman was traumatized when she was robbed right in front of her son’s house in Bandar Tun Razak, Cheras recently.

According to a police statement, the robbery was recorded by the public and went viral on social media.

The video shows the robbers snatching 2 chains and cutting the victim’s bracelet with a cutter before fleeing on their motorcycle.

The victim suffered hand injuries and the total loss was estimated at RM25,000.

Netizens had tried to help in tracking down culprits through the motorcyle registration number, which turned out to be fake.

The police has urged the public to come forward if they have information on the incident by contacting the Cheras District Police Headquarters at 013-2165881.

The Long Arm Of Justice

On Tuesday, the police said that two suspects had been detained and placed under remand.

Following the interrogation of the first suspect, police was able to arrest the second suspect who is 29 years old and also has 18 previous records.

Both suspects were detained at their respective homes, which are located around Klang Valley.

Police also confiscated items believed to be related to the case along with RM5,300 in cash.

The first suspect is on remand for six days from 27 March 27 to 1 April, while the second suspect is remanded for seven days from until 4 April.

Following the arrest of the two suspects, police believed they had successfully solved at least six robbery cases with two cases occurring in the Cheras district and four more cases in the Dang Wangi district.

What Should You Not Do While Wearing Jewellery?

Following the incident, netizens said it is better not to wear jewellery outdoors as they attract robbers easily.

Yes, there’s no point in owning something if you don’t get enjoyment from it.

However, it is better not to wear jewellery in open outdoor areas where it will get all the eyebrows raised.

The chances that you will get mugged for your jewellery are much more than having it stolen from your home.

At the same time, netizens noted that most muggers are people who are desperate for drug money, which means the culprits would not hesitate to inflict bodily harm.

It is also not advisable to wear fake items, as most criminals can’t tell the difference between expensive jewellery or costume jewellery.

It is important to always remain vigilant and not fight back especially if the perpetrator comes with a weapon.