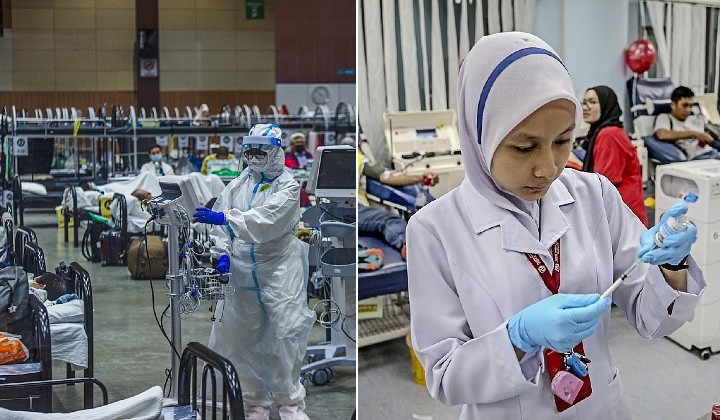 In March 2022, Health Minister Khairy Jamaluddin admitted in Parliament that the nation’s public healthcare system is chronically underfunded — which is no real surprise…

Between the sudden influx of patients needing care during the peak of the pandemic, economic slowdowns and calls for reforms from civil service doctors and medical workers who feel that they are overworked and underpaid — the public saw first-hand how the nation’s healthcare system is struggling under the enormous weight of underinvestment.

Read More: Malaysian Doctors Protest Despite Being Warned Not To

In his address, Khairy confessed that compared to other middle-income countries that spend upwards of 4% of their Gross Domestic Product (GDP) on healthcare, Malaysia was only spending about 2.6% of ours in 2020.

Meanwhile, the World Health Organisation (WHO) and other experts suggest that nations should be spending between 5% to 8% of their GDP on public healthcare.

Referencing the 2018 Auditor-General’s report, the Minister acknowledged that this underinvestment caused “insufficiencies” within government health facilities including clinics and hospitals:

The government wants to address these problems with more financial allocation and reforms to our public healthcare system, but no clear plans have been put forward yet.

In 2019, Health Director-General Tan Sri Dr Noor Hisham Abdullah exclaimed that our public healthcare system was underfunded, understaffed with underpaid, overworked and overstretched employees, and facilities that are overcrowded with patients.

We are currently underfunded, understaffed, underpaid, overworked, overstretched and with facilities overcrowded with patients.

He asserted the statement again in 2020, saying that our public healthcare expenditure was too low and that “we have been underfunded for years”.

The collision of a high burden of non-communicable diseases, particularly obesity and diabetes, hypertension and end-stage renal failure, with a highly infectious disease, unfortunately, triggered the hyper inflammation that led to severe diseases.

This is because our burdens are not only communicable diseases due to Covid, we have a double burden, a huge amount of problems with non-communicable diseases as well. We have a high number of people with diabetes, hypertension, stroke, heart problems and so on, so we need to tackle this in a holistic manner.

In an interview with BFM, she explained that Malaysia’s public healthcare system can be divided into two categories: the primary healthcare system such as clinics, and hospitals where patients are being admitted.

Dr Sharifa said that although our primary care systems are well set up, they can still be improved in order to cater to issues relating to mental health and lifestyle diseases resulting from bad habits like smoking, drinking, unhealthy diets and the lack of physical activity.

She also specified that improvements can be made to how Malaysia acquires drugs and medicine.

If we talk about drug spending, most of the drug funding in Malaysia comes from government purchases. An example would be oncology drugs, they are very expensive and we need to purchase this because a huge number of our patients suffer from cancer, they need treatment.

Gopeng Member of Parliament and former Deputy Health Minister Dr Lee Boon Chye justified that in order to fix problems in our public healthcare system and make it future proof, we must:

During the same interview with BFM, he added that with Malaysia’s ageing population, there is an increased demand for healthcare services, especially in cases of non-communicable diseases.

He asserted that the country needs to strengthen our:

Inequalities on the ground

In an opinion piece published by Malaysiakini, author and former journalist Christine YP revealed that there exists a clear gap between rich and poor in terms of getting healthcare services here in the country.

She explained that there’s a lack of access to new treatments and therapies for people in the low-income bracket — especially when it comes to non-communicable diseases like cancer.

The treatment gap between the T20 and B40 is real. Cancer Research Malaysia reported that while high-income breast cancer patients in Malaysia have a survival rate of over 90%, low-income patients have a less than 65% chance of surviving the disease.

Although this is disheartening, Christine says that there’s definitely room for improvements to make universal healthcare available for all.

Inequality exists in every fabric of society and while our coffers may not be able to provide state-of-the-art treatment for all, there is potential to strategically plan, purchase and implement science-backed targeted therapies for the most common cancers to narrow the treatment gap.

She suggested that the country could do more to bring advanced, lifesaving medicine to all quarters of the population.