Parents shared their scary experiences and close calls too. 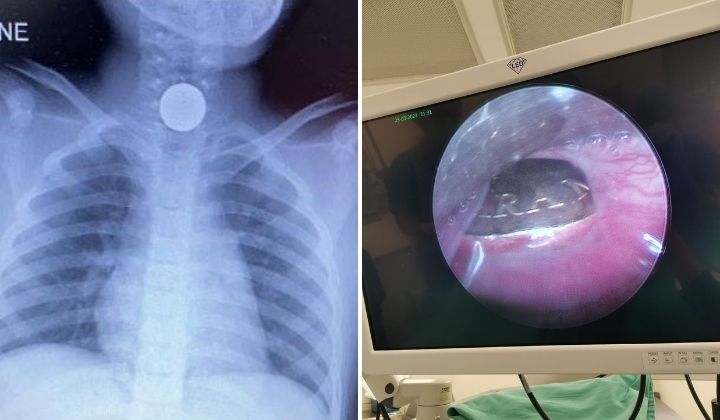 It’s good to encourage curiosity in young children. However, they must still be supervised by adults at all times to prevent accidents.

An ENT doctor named Dr Mohd Shaiful recently advised parents to keep a close eye on their children especially if there are small objects around.

A 7-year-old child was brought into the emergency room because they accidentally swallowed a 50 cent coin.

The first thing Dr Mohd Saiful was worried about was whether the coin was stuck in the respiratory airway.

Fortunately, the x-ray done by the medical officer showed that the coin was lodged in the oesophagus instead.

If it was stuck in the airway, it could be dangerous for the child because he might not be able to breathe and that could lead to death.

After putting the child under general anaesthesia, Dr Mohd Shaiful managed to extract the coin from the oesophagus of the child without any complications.

He said that it was the biggest coin value he has removed from young children. Previously, he had to remove 10 and 20 cent coins from other children.

Due to these recurring incidents, he has a few pieces of advice for parents:

If the child accidentally swallowed a foreign object, take them to the hospital immediately. Some of the choking signs are sudden vomiting or the child reaching into their mouth with their hand.

It happens more often than we think

A netizen noted that it was, fortunately, a new 50 cent coin because the old coin was larger in size.

Based on several comments, it seems like it happens to children more often than we think with several parents sharing what they went through.

Fortunately, their children were safe and the foreign objects were able to be removed fairly easily (and naturally).

However, one of the parents had a close call and their experience showed that it was important to watch the child closely.

Her husband noticed their child inserting a foreign object into their mouth and he quickly dug it out. The parents had no idea where their child found the 20 cent coin in the car.

Hopefully, all of the stories shared by parents will remind other parents that they can never be too careful and they should heed Dr Mohd Shaiful’s advice.