The scammer gets up in anger when the driver did not get down from the car. 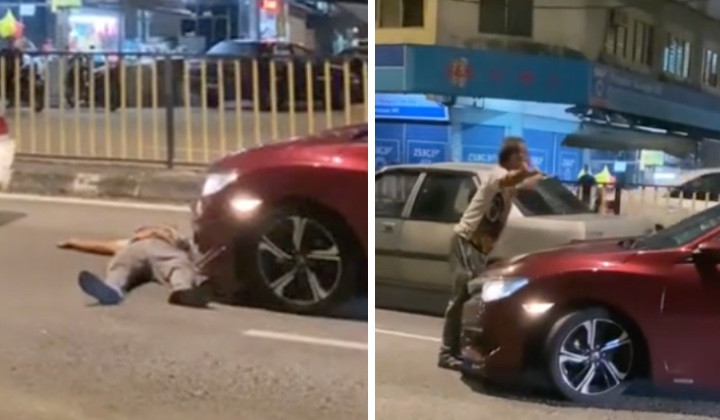 In this time of pandemic, various tactics and tricks are used by individuals to earn money out of desperation.

And when in desperation, the kinds of things that one is willing to do can sometimes endanger lives and jeopardise with the safety of others

Such is the case of a viral post in TikTok, which shows a man faking injury after he threw himself in front of a moving car.

However, the car managed to stop in time to avoid hitting the scammer.

The incident appears to have taken place in Pudu near Jalan Loke Yew.

The footage showed a thin man, in a grey T-shirt and long pants, lying on the ground in front of a red Honda Civic.

The man remained on the ground and pretending to be injured.

However, it is believed that the owner of the car did not get out of the vehicle, making the man become angry and stood up because his tactics did not work.

Next, he was seen pulling the wiper and scolding the driver for not getting off the vehicle.

Swindling Innocent Motorists Out Of Money

The viral posting has prompted netizens to warn others about scams involving fake road accidents.

They urged the public to make a report to the police immediately if they’ve encountered a similar incident.

Others condemn the scammer as his act is not only irresponsible but also poses a serious threat to road users.

As most vehicles have dashboard cameras attached, such a trick does not work nowadays.

Nevertheless, it is always better not to argue or have any physical contact with these scammers.

[Watch] Newlywed Conned On Wedding Day, Orders Catering For 700 Pax But Only Gets Food For 50 Pax