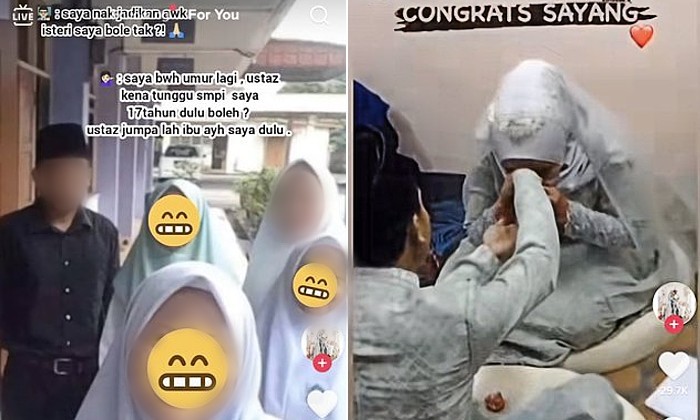 People were pretty divided when they found out alleged details about a woman’s relationship with her husband who happens to be her former school teacher.

Netizens recently came across a TikTok video shared by a user reminiscing about her marriage to her husband who she refers to as “Ustaz”.

Though the video had been removed, screenshots of the clips spread online.

The images showed the couple together in school, and later, on their wedding day.

“Alhamdulillah, Allah had prolonged our jodoh (match)”, she wrote in the captions, revealing that the two had been close since 2015.

Screenshots of the clip also included closed captions which noted that Ustaz had expressed interest in taking her hand in marriage when she was a minor.

They allegedly later got married when she was 17.

Ustaz: Can I make you my wife?!

Me: I’m still underage. Can Ustaz wait till I’m 17-years-old? Meet with my parents first Ustaz.

In the comments section, the woman further explained that the two had met when she was still a student and wrote that her husband had come to personally met with her parent during the time.

The woman also told visitors to her profile that the couple now has two children.

I met my husband in 2015, yes, but we were still (nothing more than) Ustaz and student… 2017 I was in Form 2, he personally came to meet my mother when she sent my younger sibling to school because my sibling was my husband’s pupil… I used to be a naughty kid that even my mother didn’t know what to say anymore… Alhamdulillah, one of my husband’s objectives was to change me… Alhamdulillah, he taught me a lot. (Even though) I’m free hair as an Ustaz’s wife but I’m still in the process of improving myself.

The couple’s relationship was welcomed by positivity from some members of Malaysian cyberspace.

A number of commenters had congratulated the couple on their long-lasting relationship and wished them the best.

Some moved to encourage the couple and asked them to simply ignore all the “negative” comments thrown at them since they’re legally married.

Speaking of negative comments… there were also those who see the couple’s love story as something to be frowned upon.

Some social media users expressed their distaste for the relationship that formed between a teacher and his pupil and went as far as to describe it as “child grooming”.

This is so so so wrong on every aspect. Why people still enabling child grooming? https://t.co/O9firfM5YW

Dear minors, if an adult is interested in you, run. https://t.co/oUL6GXez5k

Read More: “This Is My Adopted Brother,” Says Malaysian Man Before Kissing A Child On The Lips

Others showed concern over the views expressed by people who were OK with the idea of teachers and ex-students being together.

The woman in question even replied to some of these comments saying that she “sincerely receives” them, implying that her teacher-student relationship wasn’t something out of the ordinary.

She also added that their marriage was consented to by others and that the couple didn’t simply make their own decisions.