As the culprit was tailgating, there was no room for braking distance which caused the collision. 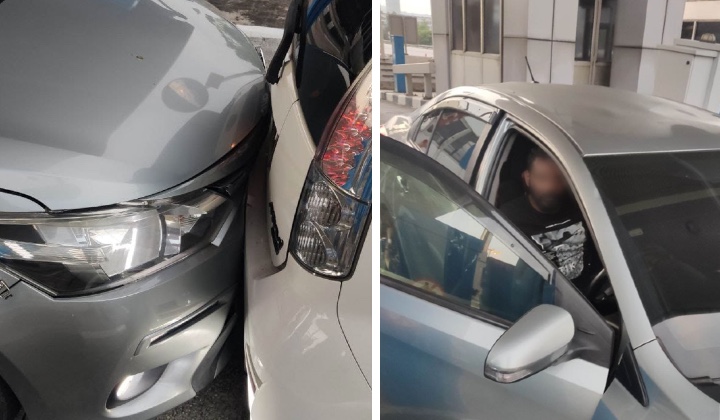 Every country has its bad drivers, and Malaysia’s worst include those trying to avoid paying tolls.

Tailgating makes the driver in front feel targeted and victimised, distracting their attention.

But these irresponsible individuals will not care that what they are doing is wrong, as long as nothing happens to themselves.

Recently, a car was caught tailgating to avoid paying toll and ends up rear-ending vehicle in front.

The vehicle in front had stopped on purpose in an attempt to stop the car behind from tailgating.

The incident was shared on Facebook by netizen Mustain Muhammad and had since become the talk of netizens.

Mustain was driving the car when it was being tail-gated.

Accordingly, a Toyota Vios hit his Myvi at the toll gate.

The Toyota Vios was following his car from behind closely so as not to pay tolls.

Even though it was clear that the driver of the Toyoto Vios was at fault, he had the cheek to scold Mustain for stopping suddenly.

The tailgater faces a barrage of criticism from netizens for his behaviour.

They described the tailgating as a driving habit that is utterly deplorable.

Not only will they not get to their destination faster, tailgaters are also putting so many innocent people at risk.

Netizens also pointed out noted that the number of accidents caused by drivers tailgating the vehicle in front has increased.

As such, they urged the authorities to tackle the problem.