A protest vote is a vote to demonstrate dissatisfaction with the choice of candidates or the current political system. 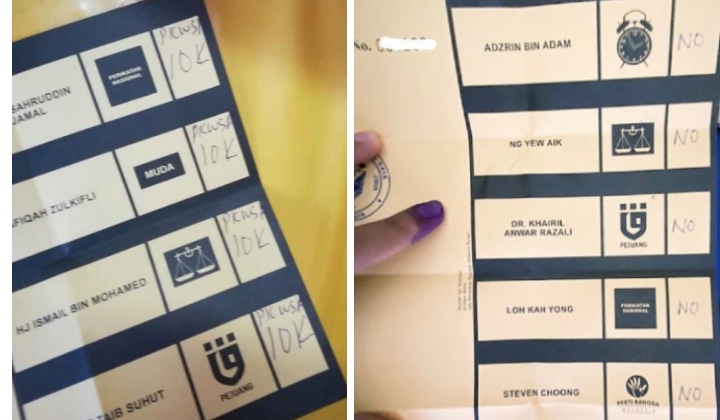 Recently, a Twitter user known as Malique Redzuan shared a picture of a spoilt vote during the recent Johor state election (PRN).

The voter wrote the word ‘NO’ for each candidate name on the ballot paper.

The ballot was for the constituency of Puteri Wangsa, which was won by the Malaysian United Democratic Alliance (Muda) with 18,891 votes.

Netizens criticised the voter for ‘wasting’ the ballot paper.

They added that the spoilt vote may also lead to a distortion of election results.

Meanwhile, other voters also shared pictures of their spoilt votes on social media.

However, there are valid reasons why people cast spoilt votes.

Spoilt votes are usually meant to convey unhappiness with incompetent candidates or disillusionment with the political scene.

GE15: Here’s Why The Purple Ink On Your Finger Turns Brown

GE15: Senior Citizen Passes Away In His Car Shortly After Voting In Kajang