The fire spread to a petrol pump and intensified the columns of smoke. 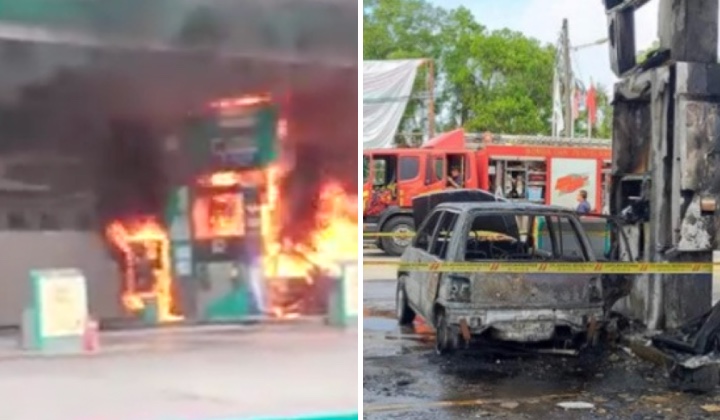 A fire broke out at a Petronas Petrol Station in Rantau Panjang, Kelantan involving a Perodua Kancil this morning.

The incident which is believed to have happened at 8.36 am became a commotion following the black smoke that billowed up to the surface of the clouds.

Based on a video posted on the Facebook page of Info Roadblock Seluruh Malaysia, the people who were at the scene ran for their life.

Accordingly, the fire initially occurred on the Kancil before spreading to a petrol pump, intensifying the columns of smoke.

The Kancil suffered about 50 percent destruction while the oil pump and its nozzles were totally burned.

The cause of the incident is still under investigation.

Thankfully, no one was injured.

However, it is understood that the driver and passenger could not be found.

The Cause For Fire While Refueling

Static electricity generates when imbalanced electric charges stay within or on the surface of a conducting material, and this could lead to the generation of sparks.

Since fuel vapours are abundant at a petrol station and near the car (while fuel is being filled), a possible combustion could happen.

All it takes is a spark to set these ablaze, which can cause an explosion.

Although it is rare, it does occur, and you can even find stories of people who started a fire with their car shut off.

Sometimes, there are other dangerous habits at the pump, such as using a lighter.

When you arrive at a petrol station, make sure to read the signs that are provided for your safety.