There is an increased likelihood of bad weather affecting you, which could potentially disrupt your plans. 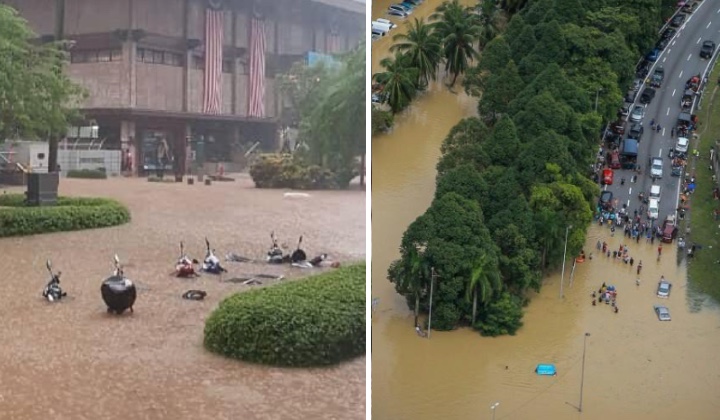 The number of extreme weather occurrences in the country had been increasing recently, and current predictions suggest that trend will continue.

Climate change experts said Malaysia is expected to experience stronger cyclones or storms in the near future due to rising temperatures.

She was quoted by Malaysiakini as saying that Malaysia may face more intense tropical cyclones in the near future.

The conclusion is based on simulations of central pressure at maximum storm levels for the future.

As more steam evaporates into the atmosphere, it becomes heat for more intense storms to occur. More heat in the atmosphere and higher sea surface temperatures can lead to increased wind speeds in tropical storms.

Hotter And Wetter Days Ahead

Haliza, who is an associate professor who has authored various journals on the issue, added that Malaysia may face high temperatures in the distant future.

Based on projections, some Malaysians might have to endure more than 240 days a year in temperatures above 35 degrees Celsius in the 2050s.

By 2090, most of Peninsular Malaysia may face the same problem.

UPM environmental scientist Haliza Abdul Rahman on the climate crisis and its implication for Malaysians.

Haliza was commenting on the situation of flash floods that hit the Klang Valley recently, which was due to the unusual amount of rainfall.

She said Malaysia has experienced “significant and continuous weather improvements”, with an average of 0.4 degrees Celsius increase per decade, over the past four decades.

The finding is based on data from the Malaysian Meteorological Department.

Carbon dioxide emissions increased at a higher rate between 1990 and 2010, causing a change in temperature from 0.7 to 2.6 degrees Celsius.

The situation could be attributed to the increase in greenhouse gas emissions, made worse by deteriorating environmental conditions due to population and rapid economic growth.

Therefore, the country has experienced a large increase in rainfall over the years, leading to an increase in the incidence of floods, landslides, hurricanes, and other weather-related incidents.

Haliza added that the country has no choice but to get its act together.

She advised the government to take various initiatives to minimize damages/costs caused by natural disasters.

Heavy rains continued with a distribution of more than 155 millimetres (mm) in just three hours can drown parts of Kuala Lumpur and some Klang Valley areas if no immediate mitigation measures are taken.

Bioengineering, flood and environmental experts also believe that the Klang Valley has developed too rapidly.

As a result, many areas turned into ‘concrete jungles’, thus disrupting the natural absorption of rainwater.

According to them, the worrying situation is expected to adversely affect about 1.8 million residents of the capital.

The grim outlook is based on the rainfall recorded recently with mostly exceeding 100mm, thus causing floods to hit Kuala Lumpur.

He was quoted by Berita Harian that the recent floods, especially in the capital, were due to unusually heavy rains.

In just two hours, the existing drainage system could not cope with the very high water flow capacity.

The readings clearly show that the rainfall distribution is no longer the same as before.

The latest readings record rainfall distributions are mostly in excess of 100mm.

If no immediate action is taken, heavy rain with readings exceeding 155mm in three hours could submerge part of Kuala Lumpur.