The food delivery rider was startled by the presence of the tiger, but managed to accelerate his bike at full speed. 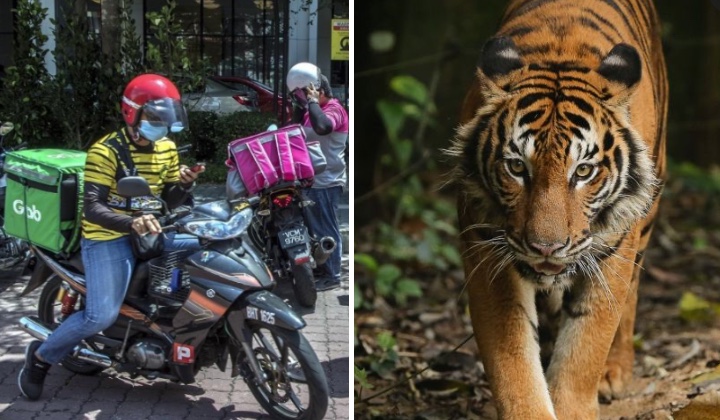 A food delivery rider in Dungun, Terengganu was almost attacked by a tiger while at work recently.

Mohd Syafiq, 27, was quoted by Berita Harian as saying that the incident happened behind Taman Bersekutu at about 8.40 pm.

He was riding a motorcycle alone and had just finished delivering food to a customer who lived in a housing estate in the area.

He took the road as a shortcut to get back to his house in Taman Permint about three kilometres from the scene.

As he made a turn, he was shocked to see a tiger about 0.5 meters tall coming out of the bush and trying to pounce on him.

I was determined to speed up the motorcycle while praying for safety.

Food delivery rider Mohd Shafiq Mamat recounting the anxious moment he was chased by a tiger.

When he looked back, he found the tiger was still chasing at a distance of about five meters.

Mohd Syafiq continued to accelerate until the tiger disappeared from view and reached the house in fear.

He believed the tiger came from the Bukit Bauk forest which is not far from the location of the incident.

He expressed concern as the road is often used by nearby residents from Jalan Lapangan Terbang and Kampung Sura.

Once back home I immediately contacted other friends telling them about the matter and advising them not to use the route.

Food delivery rider Mohd Shafiq Mamat on the danger posed to others.

He said the experience of being chased by the tiger was an unforgettable incident and he would not go through the road again, especially at night.

This is not a joke, the experience is scary and if I was not aware of the presence of the tiger, most likely I would have been ended up a being a victim.

He advised the public and residents not to pass through the area, especially at night.

Meanwhile, Andrew Sebastian, who is a well-regarded naturalist, environmentalist and sought after nature/bird guide, said tiger encounters are imminent as their habitat is being encroached by humans.

He pointed out that tigers do not normally view humans as prey.

Tigers will only attack a human if they feel threatened, or if they’re really really hungry due to being unable to find prey, said Sebastian.

Although the beasts normally prey on deer and wild boar, they too have been crossing into human territory on the prowl for food.

Environmentalist and bird guide Andrew Sebastian on why people stumble upon into tigers in urban area.