A video showing how Western media outlets are passing off fake bodies as people who died in Ukraine has gone viral. 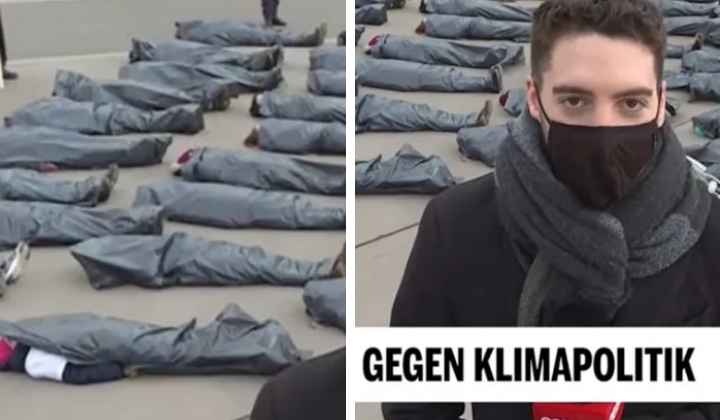 Amidst the ongoing Russia – Ukraine crisis, a video is being shared on social media platforms.

But when one of the dead bodies moved while the reporter was still talking, it raises serious doubt that they are Ukrainian war victims who died.

A reverse image search of screenshots from the video led to an Austrian website with a longer video and similar visuals.

About Ukraine
Attention! A FAKE STORY about a humanitarian catastrophe is being filmed in Poland right now.
Fortunately, the “fake-makers” “screwed up” on the air.
Unfortunately, a lot of videos from this category are expected. pic.twitter.com/tQexRRGR1B

The video is about a demonstration to protest against climate policy. It was held in Vienna on 4 February.

Protestors holding banners in with the word klimapolitik (German for climate policy, people in Austria generally speak German) can be seen in the video.

The person in front of the camera was a Germany-based reporter, Marvin Bergauer, who reported for the news channel.

Bergauer has also stepped up to dispel the fake news.

He said that Russia is also using the video as propaganda.