The girl’s effort drew praise but also trepidation from netizens. 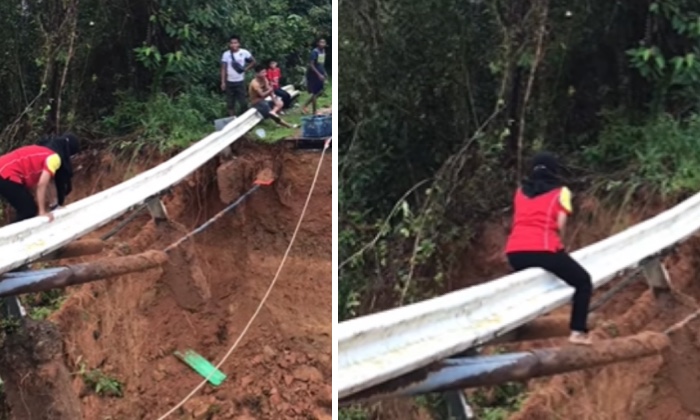 The public is well aware of the floods that are now hitting the East Coast states.

Although the weather has improved, some areas in Hulu Terengganu are still badly affected due to damaged roads and bridges.

That is what happened to the people of Kampung Belukar Bukit when the main bridge to the village was completely damaged.

At the same time, people were worried for their family and friends as they were separated from one another.

Among them is a girl who was worried about her family being stranded.

In a viral video on Facebook, the girl – who had lost contact with her family for 2 days -was determined to meet her mom.

That determination gave her the strength and courage to cross the bridge – by treading on electrical cables strewn across the river.

At the same time, she held on to a road divider to avoid falling into the raging current below.

Netizens were worried seeing the girl’s actions, which were considered dangerous because the trampled electrical cable had a fairly high voltage.

Others said it should be safe as the electricity supply would have been cut off by the TNB.

Many wish the girl and her family well.

At the same time, netizens also hope that others would not imitate the daring act due to the dangers.

Aid On The Way

During the visit, he is expected to announce the assistance that will be channelled to the victims affected by the disaster.

Flood victims in Terengganu recorded a total of 17,742 people from 4,557 families as of Tuesday morning with 141 temporary evacuation centres (PPS) opened.

People had been posting pictures and videos of the floods on social media platforms to seek help and speed up rescue efforts.

Indeed, there had also been numerous accounts of people caught in life-threatening situations during the floods.