He was rescued in the nick of time as the East Coast experienced severe rain downpours and flooding issues. 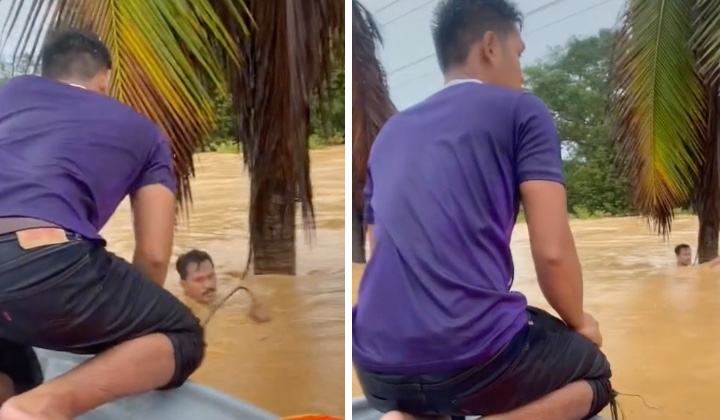 A man was rescued in Kuala Berang, Terengganu after he was found clutching a coconut tree for safety in neck-deep floodwaters.

Luckily, rescuers had spotted him in the rushing, murky waters before helping him up onto their boat.

The drama was recorded and shared on social media by TikTok user @megatmey, who was one of the rescue crews.

Despite barely out of danger, the man asked the rescue crews to check out another area.

Accordingly, there were others who were also clinging to trees to save themselves.

Netizens praised him for being considerate and thinking of others before himself.

The number of flood victims in Terengganu has increased to 17,742.

At least 4 people were confirmed dead since the flooding started several days ago.

As of 8 am on Tuesday, a total of 141 temporary evacuation centres (PPS) are open in eight districts to accommodate 4,557 families.

Platforms such as Twitter and Facebook have become sources of information for people seeking help as good samaritans offer their own aid.