The scammer advertised a modelling recruitment ad that offers good pay with working from home advantage to lure gullible victims. 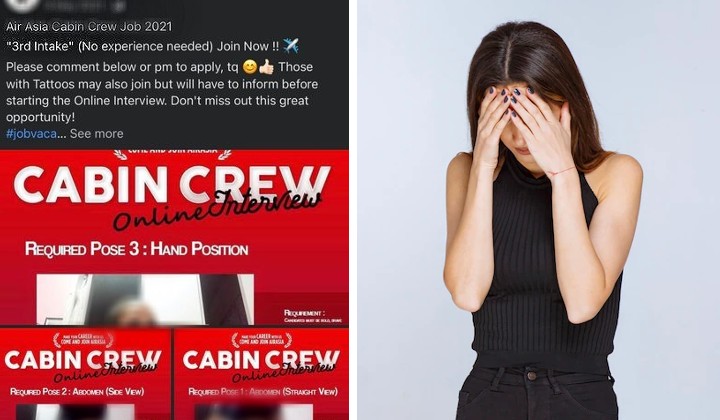 Recently, a Malaysian fashion model and public figure, Joanna Joseph, shared a thread she made on Twitter about Modelling and Scammers.

She exposed some scam profiles that allegedly offered modelling/influencer searches with a good pay.

Many women have supposedly fell prey to these scammers, oblivious to their tactics and in turned were threaten if they ever report them to the police.

Finally gathering enough information on the scams with the evidences from the victims that reached out to her and her own investigative measures, Joanna decided to expose the scammers and their tactics in her tweet. She even shared their usual modus operandi as she wants the public to know how the process works and be aware of those cunning tactics.

In the tweet, she revealed that a lot of people are scammed by profiles on social media. These social media profiles would reach out under the guise of ‘Modelling’, ‘Influencer’, ‘Air Asia interviews’ and more.

The scammers lured gullible people by offering a high payment for modelling by just working from home, and with easy applications, just via ‘online interviews’. No experience needed. But the payment could stand between RM2500 to RM3000 a month. Sounds to good to be true, is it not?

They don’t charge the victims with money but also, they DO NOT get paid.

The profiles will first ask the victim to take pictures of themselves posing so that they can use an application called “Body Scanner” to scan the their body vital stats, modelling dress and fitting sizes. It claims that this scanner can scan the victim’s body only in a singlet image, a thicker attire would hind the scanner from getting the perfect dress sizes and also make up sets for their face.

They’ll start by asking basic pictures just to check a person’s camera’s quality. They will give them ‘lessons’ on how to pose and ask them to send a picture mimicking certain ‘modelling poses’, and then proceeds to asking pictures of the victims with undergarments or maybe nude pictures.

Furthermore, the picture needs to be sent within a 2-minute rule, as they undoubtedly have many other applicants to tend to. If the person already did sent them some pictures and doesn’t obey the rest of the instructions or ‘modelling lessons’, they will threaten to expose the victim’s photos.

Besides my models being scammed, I also approached the same group that scammed my model to get some evidence and they tried doing the exact same thing to me. I called them out on it and they turned the tables on me saying that I was trying to scam them instead. But I’ve collected evidences from my followers to prove that they are indeed scamming people.

They Have Other Pages And Methods As Well

Apart from the above profile, there are some other profiles that the public should be careful of too. A lot of Joanna’s followers approached her and told her that they’ve been scammed to a particular page on Instagram.

Another finding by her follower also revealed a Telegram group where most of the women who are victims of the modelling scam are being posted in these particular Telegram groups.

There are so many victims that approached Joanna about these scams throughout the years that she lost count. Many of them are young women and some are even married as well.

What Joanna Has To Say

Reaching out to Joanna firsthand, the local model explained to TRP that this scam has been going for the longest of time and is still ongoing.

She already did an Instagram video to speak up about this a few years ago when a few of her followers asked her to do so. However, as one of her very own model from her talent agency fell victim to this particular modelling scam on Facebook, she investigated these profile in depth.

Recently after my interview with BBC on telegram groups, more victims came forth and asked me to expose the accounts that were doing the same to them.

Apart from reporting this matter to the companies which their names are being used for the scam, Joanna also advised the victims to make a police report with all the evidences as proofs. However, some of them are afraid as their pictures are already with the scammer and it might get leaked or go viral.

Joanna wanted to further remind women on the internet to be extremly cautious when it comes to things as such.

The minute someone asks you to strip for a virtual casting, it’s an absolute red flag. Even if the term “body scanner” is being used as there is no such thing in the modelling industry.

She also urged the public to help report these accounts and if any of them are victims themselves, do post about their experiences so that other women are aware about it.

“The government and police should also look into this matter as it’s serious,” added her.