Abang Viva is packing his stuff to heed the people’s call for help. 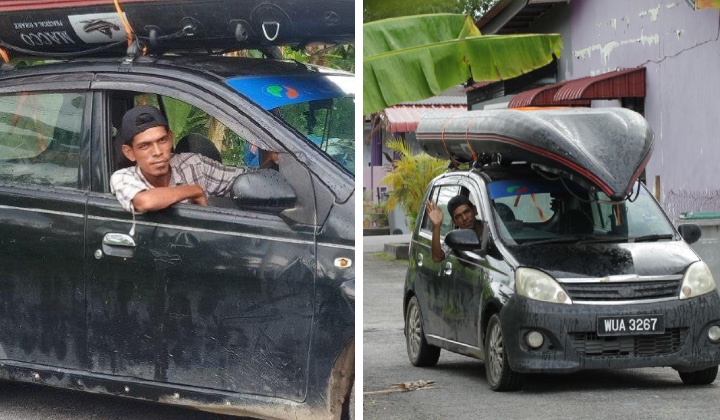 The floods that is hitting the East Coast appear to be getting worse and are worrying.

Updates from flood victims showed that many places had been inundated.

In many cases, the victims had to escape to high grounds to save themselves.

Following the worsening floods, many victims from the East Coast began to cry out to Abang Viva.

Abang Viva did not disappoint.

Responding to one of the pleas for help, Abang Viva said he is packing his stuff and will be on his way to help the flood victims.

The Unlikely Hero Of The People

The people’s champion had previously been active in helping flood victims last year.

Abang Viva, whose real name is Azwan Omar, is a factory worker whose sincerity and perseverance in helping flood victims had inspired the nation.

He started out with only RM50 in his pocket, a borrowed Perodua Viva and small boat atop the car.

With these, he traveled around from Melaka to Shah Alam to help those who are trapped in the floods.

The public showered him with so much gifts in appreciation, to the point that he had to decline them.

READ MORE: Please Stop Giving Me Gifts: Abang Viva Refuses To Do Live TikToks Because He Doesn’t Want Anything In Return

However, he did accept certificates acknowledging his help.

Abang Viva also undertook rescue training offered to him by the authorities.

At the time of writing, there has been no latest update on Abang Viva’s progress.

Let us all pray that all flood victims are safe and that everything will proceed smoothly.

[Watch] YB Leaves Behind Flood Victims In Terengganu, Sparking Accusations Of Being Selfish

Please Stop Giving Me Gifts: Abang Viva Refuses To Do Live TikToks Because He Doesn’t Want Anything In Return