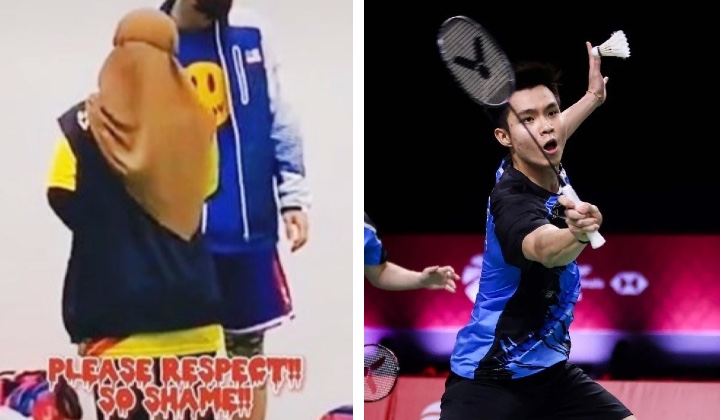 The recent victory of the Malaysian badminton team has made Malaysians excited.

Among them are the hardcore fans who will always give full support to their beloved athletes.

Despite their outpouring support, that doesn’t mean they can do what they want.

Recently, a female badminton fan went up to national doubles shuttler Soh Wooi Yik to ask for his racket.

Her action was recorded and uploaded to social media by TikTok user @nr.ieyma.

Accordingly, she approached Soh Wooi Yik at the back of the badminton court.

She appeared to beg for the racket used by the player, to be kept as a memory.

However, Soh was unable to fulfil her request and apologized to her.

They said she should be embarrassed by her attitude.

They added that she should have just asked for an autograph instead.

The fan was probably inspired by Malaysia’s badminton blue-eyed boy Lee Zii Jia who gave away his shoes to lucky fans.

Lucky me got the shoe from Lee Zii Jia. All the best for final tomorrow #BATC2022 pic.twitter.com/Sg1B0OvEp5

A close friend with Lee, Soh is part of the Malaysian team that emerged victorious at the recently concluded Asia Team Championships (BATC) 2022.

Partnering with Aaron Chia, the duo lost to world No. 857 Yuta Takei-Ayato Endo of Japan during the group stage.

The world No. 7 pair and Tokyo Olympics bronze medallists bounced back by defeating Kim Hwi-tae-Kim Jae-hwan of South Korea and Leo Rolly-Daniel Marthin of Indonesia in the semi-finals and final respectively.

Soh is said to use the Victor Jetspeed S 10, touted as one of the best doubles rackets ever released by Victor, a Taiwanese manufacturer of sporting equipment.