The post brought up some problems that are still prevalent in Malaysian schools such as the shortage of qualified teachers. 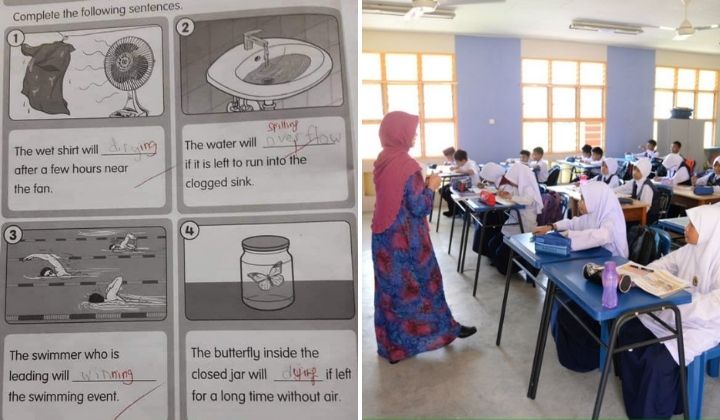 There has always been some contention when it comes to learning and using English in school examinations.

One of the reasons was that some students found it hard to master the English language due to the lack of opportunities to practice speaking it at home.

However, a recent post that went viral pointed to another important reason why students found it hard to do well in the English subject.

The post showed an English exercise book that was incorrectly marked by a teacher which was dated January 2020.

And then you ask why Malaysian English standards have fallen to incomprehensible levels. pic.twitter.com/8VHz9O5FFt

Although it seemed like an old post, netizens brought up the issue of the standard of English that was being taught in schools.

They said a lot of English teachers in schools have no qualifications or experience to teach the subject but were forced to do so due to lack of staff in schools.

Ingat ya. Some teachers don’t have background in TESL. These teachers are sometimes INSTRUCTED to teach English because most schools have shortages. If you want someone to blame, blame the system. https://t.co/u1aUDGrwCQ

Despite this, some said the teachers still have no excuse to make simple grammatical errors like these.

A netizen explained that there was no need for a qualified background to teach basic English because the root words are commonly used.

Totally agree, need no TESL background for basic english like this. The root words are commonly use in our daily basis, that teacher teaches sport meh? Like others said, at least check the answer lol before confidently marking paper like that.. me is so maluu woo

Netizens said the teachers could have done quick revisions by using resources online such as Youtube videos.

On the other hand, a few netizens think the exercise book has been doctored by someone who just wanted the post to go viral.

They pointed out that the teacher had marked the correct questions with a tick except for the second question. They believe the corrections with the wrong words were added in later to create a viral post.

The teacher dah tanda right dekat each of the questions except question no.2. My assumption is that there must be someone else who added “ing” in every answer just for the sake of getting viral.

Nevertheless, the post has sparked a discussion online and was another reminder that the Malaysian school system still needed a lot of fixing.